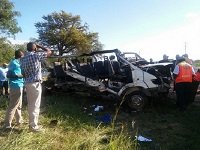 ZIMBABWE – The death toll from Thursday’s bus accident near Kwekwe, a city about 210 kilometres south-west of the capital Harare, stood at 30, officials have confirmed. The accident happened when a Harare-bound Pfochez bus collided with a Mercedes-Benz Sprinter kombi.

The bus had 40 people on board, while the number of those on the Sprinter could not be ascertained.

“Only two people from the Sprinter survived,” Madzoke said.

The critically injured were transferred to Harare and Gweru hospitals for treatment.

Preliminary police investigations showed that the driver of the Yutong-model Pfochez bus apparently lost control of the vehicle after its left front tyre burst, pushing it into the path of the Sprinter kombi. The bus landed on its side and slid for a distance, while the kombi was virtually shredded by the impact.

Those who attended the scene said the drivers of both vehicles were crushed beyond recognition.

It took three hours for firebrigade teams from Kwekwe and Gweru to retrieve the trapped bodies from the wreckages.

Zimbabwe to use Chinese yuan early next year