ZIMBABWE – Conservationists in Zimbabwe on Friday welcomed reports that a poacher who was part of a gang that killed two rhinos in the south of the country has been sentenced to 35 years in jail.

The state-controlled Chronicle newspaper reports that the unusually heavy sentence was handed down to Tawengwa Machona on New Year’s Eve by a magistrate in the city of Masvingo.

Zimbabwe is battling to save its few hundred remaining black and white rhino amid an upsurge in poaching in 2015.

Convicted poachers don’t often get sentences of more than nine years in Zimbabwe.

Machona’s sentence will only be reduced if he manages to pay back 480 000 US dollars – the estimated value of the rhinos – within the next five years, the newspaper says. If he does, he will serve 20 years in jail.

The Tikki Hywood Trust, which is well-known for its work rehabilitating endangered pangolins, described the sentence as “a great victory for Zimbabwe”.

“Congratulations to all departments involved from the ZRP (Zimbabwe Republic Police), to Parks, the magistrates together with the public prosecutors who were involved in ensuring that justice was served,” the trust said in a post to Facebook.

The two rhinos were killed in 2014 and 2015 in the Save Valley Conservancy near the southern sugar cane-growing town of Chiredzi.

Two of Machona’s accomplices are being charged separately. The alleged ringleader is an assistant officer in Zimbabwe’s secret service. Two more members of the gang are reportedly on the run.

“You deserve a deterrent sentence so that you can be a reformed person when you come out of prison,” Magistrate Langton Ndokera was quoted as saying.

Four rhinos were poached in Zimbabwe’s Lowveld region during a three-week period towards the end of the year.

Rhinos are killed for their horns, which are used in traditional medicine, mainly in Asia. They’re so valuable that even rhino calves are targeted. 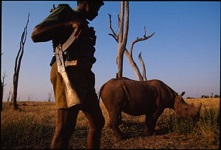 ZIMBABWE - Conservationists in Zimbabwe on Friday welcomed reports that a poacher who was part of a gang that killed two rhinos in the south of the country has been sentenced to 35 years in jail. The state-controlled Chronicle newspaper reports that the un...
Share via
x
More Information
x