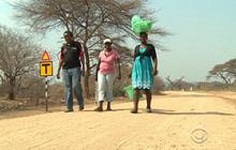 ZIMBABWE – There’s outrage over the recent killing of a giant African elephant in Zimbabwe, but the hunt was legal, sactioned by the country’s national parks to raise funds for conservation.

Did the elephant, as some believe, die for a good cause?

Though Zimbabwe’s national parks authority said the shooting of this massive African elephant was legal, some conservationists said it’s unethical.

Others say the hunting fees — $90,000 for a single animal — are crucial for conservation.

“I am appalled by trophy hunting,” said Guy Balme of the conservation group Panthera. “I can’t stand it. It nauseates me, but at the moment it’s a necessary evil.”

There is growing international corcern that Zimbabwe’s elephant population is in significant decline.

So much so that the U.S. Fish and Wildlife Service has suspended all imports of sport-hunted elephant trophies from that country.

But money from hunting and photographic tourism is the national park’s sole source of funding.

It is supposed to be ploughed back into conservation and assist poverty-stricken communities living near the parks.

But Emmanuel Fundira, of the Safari Operators Association Zimbabwe, told CBS News that corruption and bloated bureaucracy prevent much of the money from helping those in need.

Our cameras tracked down Theo Bronkhorst before he entered a Zimbabwe court. He says the charges surrounding the death of Cecil, a beloved nation…

“Well I would say it’s intended to help conservation,” Fundira said. “There’s a difference: do those resources then get into those communities? I think that’s where the question mark is.”

Local chief Victor Nekatambe grew up in one such community near the Hwange National Park, and he said “They are getting nothing, absolutely nothing.”

Even though it appears there is no tangible benefit to communities, the high price tag that hunters are willing to pay for their trophies means the hunt will go on.

Cop up for fraud, theft

ZIMBABWE - There's outrage over the recent killing of a giant African elephant in Zimbabwe, but the hunt was legal, sactioned by the country's national parks to raise funds for conservation. Did the elephant, as some believe, die for a good cause? Thoug...
Share via
x
More Information
x