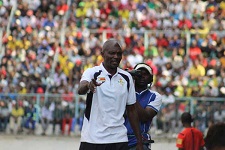 ZIMBABWE – The circus and drama at number 53 Livingstone Avenue leaves a lot to be desired.

My heart bleeds whenever I hear of the maladministration being exhibited at Zifa house.

I was shocked when I heard national team coach, Kalisto Pasuwa and the entire technical team had been sacked by the newly-elected board led by Phillip Chiyangwa

Pasuwa is one of the best coaches in the country and he has absolutely done well on both local and international assignments.

The coach had previously gelled well with soccer players and our beloved Warriors were slowly becoming a force to reckon with in Africa.

This Boko Haram approach of running our football will not augur well for this beautiful game of football.

Is that what these councillors voted for?

Why are we pressing a self-destruction button at the time when every soccer lover is looking for the resuscitation of this game and preparing for the African Nations Championship (Chan) tournament?

It looks like we have allowed political agents to run the football in Zimbabwe.

It is still not crystal clear why Pasuwa was shown the door.

This horrible approach is so embarrassing and and must not be entertained by a sane person.

We have said it long back that the Zimbabwean football needs people who have soccer at heart with quality, sound management and adminstration skills, not chancers who are always full of self-aggrandisement .

How can they fire a coach when there is no better replacement of that same coach.

They were not supposed to interfere with his selection of soccer players and their core business is to look for money to fund travelling and booking expenses.

There is a lot of confusion at the moment as the players prepare for such a very important assignment.

It’s a pity that this Zifa board has caused more damage to the Zimbabwean football than it has stayed in the office.

It was only last week when they wanted to fire Premier Soccer League boss Twine Phiri for no apparent reason.

Our soccer has gone to the dogs and slowly we are leading it to the grave yard if no prompt action is taken.

This game of football does not belong to either Omega Sibanda nor Philip Chiyangwa, but the soccer lovers of Zimbabwe.

This is unacceptable it is unheard of. Personally, I do respect Pasuwa with all his principles.

ZIMBABWE - The circus and drama at number 53 Livingstone Avenue leaves a lot to be desired.  My heart bleeds whenever I hear of the maladministration being exhibited at Zifa house. I was shocked when I heard national team coach, Kalisto Pasuwa and the ent...
Share via
x
More Information