ZIMBABWE – The Anglican Church in Zimbabwe has opened books of condolences for the late principal of St Augustine’s Mission Father Kebble Hugh Prosser who died on November 4 last year in the United Kingdom.

He was cremated on November 18 and his ashes will be buried on March 5 this year at the mission school where he spent most of his working life.

The burial will be preceded by a memorial service, which will be held at the St Mary’s and All Saints Cathedral in Harare on March 3.

The books of condolences will be opened at Anglican Church cathedrals in Bulawayo, Gweru, Masvingo, Harare, Chinhoyi and Mutare.

In a statement yesterday, chairman of the apex committee of the Tsambe Old Students Association Mr Albert Kamhunga described Father Prosser as a passionate man who was committed to doing God’s work.

“He was loved and held in high esteem by many. It was his last will and testament that he be buried at St. Augustine’s.”

The TOSA committee is coordinating the process of bringing Prosser’s ashes to Zimbabwe and the burial in collaboration with the Anglican Diocese of Manicaland.

“We are currently mobilising funding from former students, colleagues and well-wishers to give him a send-off that is befitting of his most distinguished service to the school, the community and Zimbabwean society at large,” said Mr Kamhunga.

He read history at Trinity College, Cambridge, and was ordained a Priest in 1958.

He joined The Community of the Resurrection (CR) at Mirfield in 1962 and was awarded a Post Graduate Certificate in Education at the University of Leeds in 1963.

Known as Muzungu by his students, Father Prosser was a visionary icon whose leadership touched and transformed thousands of lives in Zimbabwe and the world in general.

He joined the teaching staff at St. Augustine’s in 1964 and was promoted to principal of the school in 1974.

His leadership style and devotion to Christianity influenced thousands of Zimbabweans.

Known for the signature theme of his pep talks — “Remember, remember, November is around the corner”, he will always be remembered by Zimbabweans for the high standard of education he demanded of the teachers and students at St Augustine’s.

Father Prosser made history in Zimbabwe for his principled stance against racial segregation and discrimination.

At the height of the liberation struggle for Zimbabwe he was often threatened with arrest by the much feared Rhodesian Special Branch for collaborating with Zanla freedom fighters operating in the area surrounding the mission.

He managed to keep the school open through the war and carried on after independence until he left for his native United Kingdom in 1990. 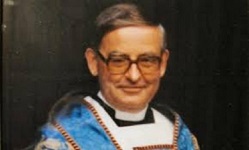 ZIMBABWE - The Anglican Church in Zimbabwe has opened books of condolences for the late principal of St Augustine’s Mission Father Kebble Hugh Prosser who died on November 4 last year in the United Kingdom. He was cremated on November 18 and his ashes wi...
Share via
x
More Information
x