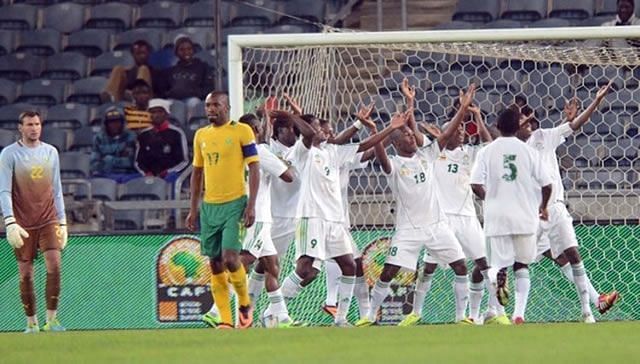 SOUTH AFRICA – South Africa have put themselves in a strong position to advance from Group G of the 2022 World Cup Qualifiers after they defeated Zimbabwe 1-0 at the FNB Stadium on Thursday evening.

The result – secured by a first-half goal from Teboho Mokoena – means Bafana Bafana have a three-point lead over nearest chasers and final opponents Ghana heading into their last match away from home on Sunday night.

Only a defeat at the hands of the Black Stars will prevent SA from becoming one of the 10 teams in the playoff round next year, though no game against Ghana should be taken for granted.

The Warriors, meanwhile, remain bottom of the log after claiming just one point from their five outings in Group G.

The teams traded half-chances through the opening 20 minutes, with South Africa enjoying more of the ball, though Zimbabwe probably looked the more dangerous outfit with their pace and directness in transition.

Yet it was Bafana Bafana who claimed the lead 26 minutes into the game, with Keagan Dolly’s in-swinging cross from the right picking out Teboho Mokoena at the back post, and the SuperSport United midfielder provided a perfectly placed header back across goal to beat the left hand of goalkeeper Petros Mhari.

Both teams went into their shells somewhat in what remained of the first half, with South Africa satisfied to sit back and look to hit their opponents on the break.

Zimbabwe offered a sporadic threat through the craft of Khama Billiat and the clever movement of Ishmael Wadi, but the interval arrived with the hosts still 1-0 to the good.

Zimbabwe should have levelled the game when midfielder Blessing Sarupinda was gifted a chance in front of an open goal on 49 minutes, but he somehow failed to hit the target – a raised offside flag somewhat spared his blushes, but it was still an astonishing miss.

The Warriors introduced Kudakwashe Mahachi and Knox Mutizwa off the bench by the hour mark in an attempt to get back into the game, while SA refreshed their attack with Fagrie Lakay replacing the hard-running Evidence Makgopa on 63 minutes.

Lakay was involved immediately and teed up Dolly to shoot from long range, with the latter’s effort tipped over the bar by Mhari – who soon made another fine save to keep out a goal-bound header from Njabulo Ngcobo.

Zimbabwe looked to build pressure in the dying minutes, but there was nearly a second goal for the hosts when Lakay had a sharp turn and shot which flashed just wide, while a short while later Bongokuhle Hlongwane dived to get on the end of a fine cross from the right but couldn’t get a clean enough connection to find the back of the net.

Hlomgwane also hit the crossbar – via the right hand of Mhari – in the final minute of regulation time with a rocket long-range effort. It proved the last major attacking moment as the game ended 1-0 in favour of Bafana Bafana.

The teams will wrap up their group stage campaign on Sunday, 14 November, with SA away to Ghana in Cape Coast and Zimbabwe hosting Ethiopia in Harare.

SOUTH AFRICA - South Africa have put themselves in a strong position to advance from Group G of the 2022 World Cup Qualifiers after they defeated Zimbabwe 1-0 at the FNB Stadium on Thursday evening. The result – secured by a first-half goal from Teboho M...
Share via
x
More Information
x