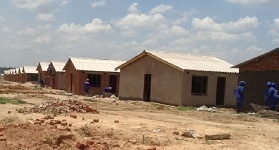 ZIMBABWE – Local authorities should be pro-active and regularly inform residents on the status of land on which they are developing while residents must also do the same to avoid loss of property, Zimbabwe Institute of Regional and Urban Planners president Mr Percy Toriro has said.

In an interview last Thursday, Mr Toriro said that Harare City Council as the local planning authority was mandated at law to manage all developments within its area of jurisdiction.

Mr Toriro’s sentiments come after Harare City Council warned home owners in low density suburbs who built their homes without approval from council to regularise their plans or risk demolitions.

The city has also demolished hundreds of properties which were built illegally on land meant for other purposes.

“This is important because ordinary people have heard about illegal developments being demolished in the peri-urban areas of Harare. Now that there is talk of demolition in areas in the intra urban zones, the public needs clarity on the situations,” he said.

Mr Toriro said where someone has built a house on a properly approved residential stand without approved building plans, the law compels the local authority to allow such a person to regularise the development by submitting building plans and paying relevant fees before resorting to demolition.

He said there was an acknowledgement that such a person could keep their house provided they were willing to regularise their development.

“This is different from someone who has built a house on a wetland or a piece of land zoned as open space or some other non-residential use and where no subdivision plans were approved. On such land, there is no option to regularise because the use cannot be permitted.

“In other words, a house cannot be built in that area. This is where demolition remains the only option because nothing else can be done without changing the land use. As planning professionals we therefore encourage residents to understand the planning provisions of wherever they are,” he said.

He said local authorities were duty bound to follow both the spirit and letter of planning laws and procedures.

“In these difficult economic times, it is sad if property has to be lost. However Zimbabweans must also be encouraged to be law-abiding citizens so that we can have sustainable development,” he said.

Be pro-active: Councils told… 'Inform developers on status of land to avoid demolitions'

ZIMBABWE - Local authorities should be pro-active and regularly inform residents on the status of land on which they are developing while residents must also do the same to avoid loss of property, Zimbabwe Institute of Regional and Urban Planners president...
Share via
x
More Information