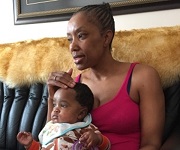 ZIMBABWE – Francisca Mandeya gets teary-eyed when speaking about her three kids. She came to Nunavut as a refugee from Zimbabwe just over a year ago but she couldn’t bring her children with her.

“Sometimes life doesn’t give you a choice,” said Mandeya. “I was in a position that I didn’t have a choice but to leave.”

Mandeya came to Canada as a refugee because she was afraid for her life. Back in Zimbabwe, she was an activist working on women’s rights issues, environmental campaigns and peace initiatives.

“I’m such a loud mouth; I can’t keep quiet when something’s wrong,” she said.

Tina Nleya, Mandeya’s younger sister, encouraged her to join her in Nunavut.

“Some of her friends had been arrested because of the same work that she was doing, so I became concerned,” said Nleya.

“I thought I may just lose my sister.”

As part of her activism, she released a 12-track album singing about the social and political problems in Zimbabwe.

“Music is a powerful force that can transform minds,” said Mandeya. “It can cause change.”

Being a newcomer in Nunavut is not easy. Even simple things like walking to work can be a challenge for someone new to winter in the North.

“It was shockingly cold, like a 100 degrees Celsius temperature change for me,” said Mandeya.

She added that it takes a shift in perspective to acclimatize.

“It’s a question of attitude. Like, I’m here, so if my sister can survive here, it means I can also survive.”

The cost of living is another challenge. Mandeya juggles two jobs. Her day job is with the Government of Nunavut as a senior advisor in business development. At night, she’s a cashier with Arctic Ventures.

“Food is expensive, rent is expensive. And I’m a single mom of three, so I have to look after my own, so most of my money is going back home and we know that the Canadian dollar has fallen quite substantially in the past year, so that means I have to work extra hard,” said Mandeya.

With three kids still in Zimbabwe, Mandeya says she has to parent via social media.

“It’s not easy parenting over social media but that’s the best I have so far.”

Mandeya said she hopes that in the next few years she can bring her 17-year-old son to Canada, and she’s hopeful that one day her 22- and 24-year-old daughters can also join them.

Despite her busy schedule, Mandeya has continued her community work in Iqaluit. She has taken suicide prevention training and has worked in partnership with the status of women group.

These days she’s raising money for Syrian refugees with her church by hosting lunch-time fundraisers where she performs music and sells food.

“People in need of help fleeing their countries to come to a place of safety, I can identify with that,” she said.

‘For me I never sing for people to go and jive in the bar, no, I sing because an issue has touched my heart, and I want other people to hear other people’s plight and do something,’ added Mandeya. (CBC)

“I can imagine the children, the women, what they’re going through.”

Mandeya uses her music to draw a crowd.

“For me, I never sing for people to go and jive in the bar. No, I sing because an issue has touched my heart, and I want other people to hear other people’s plight and do something.”

Being black in Nunavut

In Nunavut, black faces are still relatively rare but the community is growing with many newcomers arriving from Africa and the Caribbean.

Stephanie Bernard with the Nunavut Black History Society said there are no definitive statistics on the number of black people in the territory, but she estimates there are between 300 and 350.

“There’s a shared colonial past and so I think, from that standpoint, there’s a whole lot of understanding from Inuit towards blacks here,” said Bernard.

She points to the success of Black History Month activities in Iqaluit over the past three years as a sign of that connection.

For Mandeya the experience has not always been positive.

“It’s difficult to be a black person in Nunavut,” said Mandeya.

“I’ve had the black thing thrown in my face, like ‘you black thing,’ but it doesn’t bother me.”

‘It’s a question of attitude, like I’m here, so if my sister can survive here it means I can also survive.’ said Francisca Mandeya. (Sima Sahar Zerehi/CBC)

Regardless of some of her experiences with racism, Mandeya said she has found a great deal of connection between her new home and her homeland.

Mandeya said both places share similar struggles when it comes to violence against women, substance abuse, and poverty-related health issues such as tuberculosis.

Mandeya said she also sees similarities when it comes to community and culture.

“I have a lot of rich experiences and genuine relationships with Inuit people. I think they’re beautiful people. I identify a lot with them.”

Inuit games, throat singing, storytelling and the reliance on traditional skills like hunting are other parallels.

“It’s surprising how we always want to look for difference where there’s actually a lot of similarity,” she said.

ZIMBABWE - Francisca Mandeya gets teary-eyed when speaking about her three kids. She came to Nunavut as a refugee from Zimbabwe just over a year ago but she couldn't bring her children with her. 'Sometimes life doesn't give you a choice,' said Mandeya...
Share via
x
More Information
x