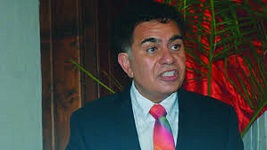 ZIMBABWE – ZIFA presidential hopeful, Trevor Carelse-Juul has rubbished claims made by his rival Leslie Gwindi that he does not qualify for the December 5 election because he has not been a resident of Zimbabwe for at least five years.

However, in an interview with our sister paper NewsDay yesterday, Gwindi questioned the credibility of his rivals, particularly the South Africa-based businessman Carelse-Juul, who he said should be disqualified from the race.

“We have conditions that we have set [in the constitution]. For example, if a person hasn’t stayed in the country for five years or more, they don’t qualify and if a person hasn’t administered the game for five years, they don’t qualify as well. So there mustn’t be an exception. We want that instituted and want the vetting committee to look into the veracity of all those applications. Trevor does not qualify because he has been away for 21 years,” Gwindi said.

Gwindi’s comments came less than 24 hours before the start of the process to vet the participating candidates contesting the posts of Zifa president, vice-president and board members by the Zifa electoral committee.

However, in an interview with Standardsport from his base in South Africa, Carelse-Juul — who contested and lost in the last Zifa presidential election — remained defiant, saying he was unmoved by Gwindi’s attempts to influence the vetting process.

Carelse-Juul also said he had been cleared of any wrongdoing in the construction of Angwa City where his company SBT Juul Africa was part of the probe into how the tender was floated and won.

“The thing is I was cleared so many years ago and nothing has changed. If anything, my business interests in Zimbabwe are growing,” Carelse-Juul said.

“For the past five years we have been developing business in Zimbabwe. I have a residence and various properties and an office in Harare and business interests elsewhere. I’m in and out of Zimbabwe on a regular basis as an international businessman. I just keep a low profile.”

“I regularly watch Zimbabwean football on television and have been to local matches. In fact, I was at the match between Dynamos and CAPS United in February [Sino-Cup Challenge match] and I even go to watch junior football whenever I can while in Zimbabwe. Everyone knows my love for the beautiful game and my country.

“It’s sad some people are looking at the negatives rather than the positives and what needs to be done is to improve our football. Instead, some of the questions people should be asking are what is the person’s record? What have they done and achieved and what they capable of and what is their plan to achieve it?”

Carelse-Juul lost to the deposed Dube in the second round of the voting in last year’s Zifa presidential election following the elimination of two other candidates –Gwindi and Nigel Munyati.

Dube polled 44 votes to Carelse Juul’s 14 in the run-off after none of the candidates had polled the required two thirds majority to be confirmed the outright winner.

Meanwhile, the Zifa electoral committee headed by former Labour Court judge Sello Nare was yesterday expected to vet names of candidates contesting the posts of Zifa president, vice-president and board members in an election to be held next month.

After yesterday’s meeting, the Zifa electoral committee would only make public their final list of successful candidates on November 5.

ZIMBABWE - ZIFA presidential hopeful, Trevor Carelse-Juul has rubbished claims made by his rival Leslie Gwindi that he does not qualify for the December 5 election because he has not been a resident of Zimbabwe for at least five years. Carelse-Juul filed h...
Share via
x
More Information
x