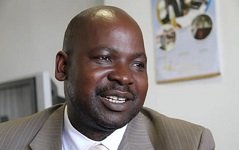 ZIMBABWE – The High Court will tomorrow determine whether or not the Judicial Service Commission should go ahead with setting up a tribunal for the removal of Prosecutor General Mr Johannes Tomana from office.

JSC has since initiated the process through letters written to Mr Tomana to hear his side of the story on his suitability or otherwise to continue holding the esteemed office.

Mr Tomana, who is facing criminal charges at the Harare Magistrates’ Court involving Gushungo Dairy bombing, was in October last year slapped with a 30-day jail term for contempt of court after he defied court orders to issue certificates for the private prosecution of Bikita West legislator Dr Munyaradzi Kereke and Telecel shareholder Dr Jane Mutasa.

Kereke was accused of raping an 11-year-old relative while Mutasa was facing charges of swindling the company of airtime recharge cards worth millions of dollars.

Tomana was fined by a nine-member judges’ panel of the Constitutional Court led by Chief Justice Godfrey Chidyausiku.

The sentence was, however, wholly set-aside on condition that he complied with the court orders and issued private prosecution certificates to Mr Francis Maramwidze and Telecel within 10 days, failure of which he would be barred from practising as a lawyer in Zimbabwe.

The following month, Tomana was again at the centre of another storm for allegedly abusing the court process to rubber-stamp the acquittal of former Zupco board chairman, Professor Charles Nherera, who was charged with corruption.

The abuse reportedly occurred at the time when Tomana was the Attorney General.

Prof Nherera was acquitted by the High Court in November 2009 barely a year after Tomana was appointed to the post of then AG.

Upon receipt of the letters from JSC demanding his explanation of the two court orders he failed to comply with, Mr Tomana, through his lawyers Mambosasa Legal Practitioners, filed an urgent chamber application at the High Court seeking to bar JSC from recommending his removal from office and proceeding with the disciplinary process.

In terms of the Constitution of Zimbabwe, the PG is placed on the same level with a Supreme Court judge and the same supreme law of the country provides that the PG must be removed from office the same way judges are expelled.

“Yes the matter has been set down for March 2 at the High Court before Justice Lavender Makoni,” said Mr Mambosasa.

“The Honourable judge seized with the matter has directed that the matter be heard on March 2 2016 at 1430hours.

“The Honourable judge has also given directions which have been endorsed on the notices of set down . . .”

In the urgent chamber application, Mr Tomana is seeking to stay the removal process in the interim, pending the finalisation of the matter.

He argues that the process seeking to remove him from office was unlawful and was activated by the JSC.

Mr Tomana argues that the Constitutional Court judgment which committed him to jail unless he issued certificates for private prosecution was issued from a court of no jurisdiction.

“The orders I was held to have been in contempt of are orders of the High and Supreme Courts respectively,” said Tomana.

He also contends that the order was also invalid in that the Constitutional Court dealt with a matter which was not before it.

The Constitutional Court, he added, cannot at law deal with a contempt of court matter.

Mr Tomana said the matter that was before the apex court was an ex-parte application he had made which sought the declaration on the question of his independence.

He also argues the proceedings that gave rise to Constitutional Court order were a nullity given that the Deputy Chief Justice Luke Malaba was not part of the bench when the order was granted.

“Constitutionally, the Constitutional Court cannot be properly constituted within the first seven years of its life if it does not consist of the Chief Justice and the Deputy Chief Justice who must sit together in hearing any and every matter,” he argues.

“An order by an improperly constituted court is obviously a nullity.”

Mr Tomana also argues that a citizen, Rooney Kanyama, has challenged the validity of the Constitutional Court order committing him to jail.

He attached Kanyama’s application that was filed in the Constitutional Court last week.