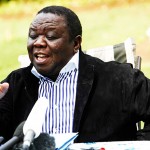 ZIMBABWE – As the hope of becoming the leader of the Zimbabwean government is fading away on a daily basis as well as is dawning on him that he would never be the one, the MDC-T leader Morgan Tsvangirai thinks that by inciting violence among his supporters that would catapult him into State house. Tsvangirai is wrong to think that he can become a leader of Zimbabwe if his supporters are incited to indulge in violence when democratic means are the only ways to make one become a national leader.

While addressing his supporters in Alaska, Chinhoyi last week, the MDC-T leader Morgan Tsvangirai urged his supporters to retaliate once they were attacked by the ZANU PF supporters. Tsvangirai told them that there was no need to seek for support from the police as the force only takes action when it is ZANU PF which is in the receiving end. The MDC-T leader failed to educate his supporters to go against violence but encouraged them to do things which are against the rule of law. As the so called democratic leader, Tsvangirai failed to see that with violence nothing productive can come out of such a move.

What Tsvangirai failed to realise is that Zimbabwe has been practising democratic ways of choosing its leaders through the ballot since independence in 1980 and with that in mind the MDC-T leader should let democracy remain in place without inciting his supporters to use violence against their political rivals. The electorate needs leaders who can come up with plans and ideas to revive the economy not those who think that they can get support if the economic situation of the country keep on deteriorating.

The MDC-T leader is failing to appreciate that violence has no room in the politics of the country, Zimbabwe and only through the ballot can one be ushered into the echelon of the Zimbabwean leadership matrix. Tsvangirai is not aware that one can become a good leader if he/she has a well-articulated manifesto which could attract the electorate to vote for him/her.

Morgan Tsvangirai`s call for violence surprised even his supporters during that rally in Alaska, Chinhoyi when he encouraged them to fight back when attacked by ZANU PF supporters as a way of defending themselves from such an attack. Tsvangirai failed to preach about peace among his supporters but chose to incite violence instead meaning that he preached things which were against the rule of law.

The call by Tsvangirai for his supporters to retaliate in the event that they were attacked by ZANU PF supporters showed that he has lost confidence in himself becoming the national leader of Zimbabwe. The MDC-T leader knows quite well that he cannot win any election in the country as he no longer command any support hence his call for violence to destabilise the peaceful environment that is prevailing in the country. For that reason the MDC-T leader needs to be informed that there is no short way to success hence he should use democratic ways to catapult himself into State House.

Tsvangirai who for more than a decade has been calling for the international community to keep sanctions on the country as a way of making the public suffer economically so that they would turn their back against ZANU PF, thinks that violence would assist him to be a Zimbabwean leader. The MDC-T leader thinks that if the violence breaks loose like what happened in the Arab spring in 2011 that saw the overthrow of such leaders like Hosni Mubarak of Egypt, Ali Ben of Tunisia as well as Murmur Gadhafi of Libya, the same would be possible in Zimbabwe leading to him taking over as the Zimbabwean president.

So the MD-T leader is naïve to the extent of failing to see that violence has no room in Zimbabwe and that only through the ballot is when one can become a national leader. In actual fact instead of inciting violence, Tsvangirai should be busy trying to avoid another split of his party which is looming.

Since becoming the opposition leader, Morgan Tsvangirai has witnessed several splits of his party since its formation in 1999 and now he is facing another split of his party as information circulating is that his former national organising secretary Nelson Chamisa is thinking otherwise. Reports going around the country are alleging that Chamisa and his backers are planning to go their own ways further disintegrating the once powerful opposition political party in the country.

As such the MDC-T leader instead of inciting his supporters to indulge in violence, he should focus his power in making sure that his party remains intact as a way of avoiding another split which could further drive his political fortunes into the abyss. Tsvangirai is not aware that by encouraging his supporters to indulge in violence, the same can back fire to him in the event that some factional wars in his party adopt violence as a means of solving their disagreements.

As quick response to the call by their national leader to disregard the rule of law in the country, some MDC-T supporters led by their Highfield East Member of Parliament, Erick Murai held an illegal meeting in Hopley, Harare South over the weekend without the blessing of the Zimbabwe Republic Police (ZRP). Having held the meeting illegally, seventeen of the MDC-T members including Erick Murai were arrested by police as the ZRP made sure that the rule of law has to be abided with despite the MDC-T leader Morgan Tsvangirai inciting them do go against it.

Some MDC-T supporters should be well informed that indulging in violence will never make their leader become the Zimbabwean president but they are the ones who would end up at the receiving end. The arrest of the seventeen MDC-T members by police over the weekend is another example where the reality pointed that only those who disregard the rule of law end up behind bars with the inciters of violence sitting comfortably in their well-furnished and air conditioned houses.

So those with eyes should see the reality on the ground and come to appreciate that they would die for nothing as those inciting violence like the MDC-T leader Morgan Tsvangirai would always remain protected and only shouting for others to die for them to become leaders.

What happened to Zimbabwe’s economy?

ZIMBABWE - As the hope of becoming the leader of the Zimbabwean government is fading away on a daily basis as well as is dawning on him that he would never be the one, the MDC-T leader Morgan Tsvangirai thinks that by inciting violence among his supporters...
Share via
x
More Information
x