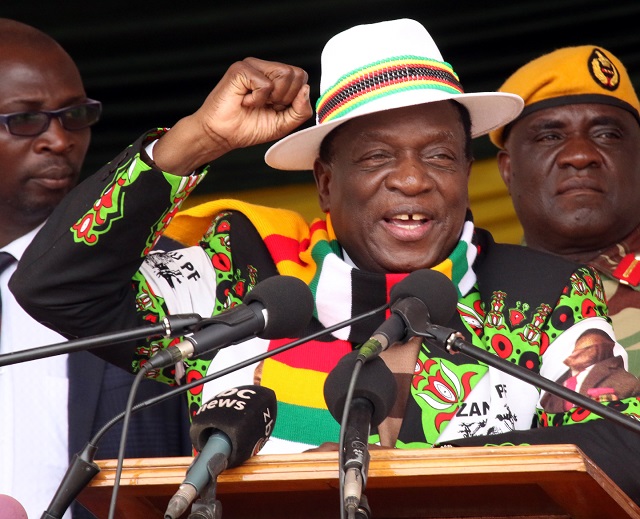 HARARE – President Emmerson Mnangagwa is on a push to eliminate any possible challenge from within Zanu PF for the 2023 presidential election ticket.

The 79-year-old already seems to be in control. In April he successfully abolished the running mate clause in the constitution, giving him power to have his deputy serve at his discretion.

But that has not stopped his foot soldiers from making sure there is no challenger as Zanu PF lays the ground for this year’s party conference in December, to be followed by an elective congress in 2022.

Between him and his deputy, retired army general Constantino Chiwenga who led the coup that dislodged the late Robert Mugabe in 2017, there was a gentleman’s agreement that Mnangagwa would serve one term and pass the baton

Mnangagwa’s daughter Farai, just before his July 2018 controversial victory, told the UK’s Independent newspaper that he intended to serve one term to “avoid making mistakes” made by  Mugabe.

That has changed. In typical Mugabe fashion when the late Zimbabwean strongman had to make it clear his job was not for the taking, Mnangagwa’s people have launched #FiveMoreYears on social media to block succession ambitions within Zanu PF.

Information secretary Nick Mangwana argued that his principal has to continue, because “he needs to finish what he started.”

Pro-Mnangagwa functionaries in Zanu PF claim he has done well to stabilise the economy and has embarked on infrastructural development. For the country to become a middle-income economy in 2030, President Mnangagwa has to be at the helm.

Finance minister Prof Mthuli Ncube last week joined the pro-Mnangagwa brigade. In an interview with the state run Chronicle newspaper, the finance minister said he worked under “the best boss ever”.

“When I joined the government in 2018, I was invited by President Emmerson Mnangagwa. In my view, I will say this and for me I speak from the heart, he is the best boss I have ever worked with … he has the right qualities to lead,” he said.

“Let’s be united and rally behind President Mnangagwa’s leadership. President Mnangagwa has only been in power for three years,” said Monica Mutsvangwa, the women’s league secretary for administration who is also minister of information and publicity.

“There is no better candidate for the 2023 election other than President Emmerson Mnangagwa,” said the association’s national chairperson Raymond Chiwara.

Opposition political parties sympathetic to Zanu PF under the Political Actors Dialogue (POLAD) who enjoy privileges such as cars, diplomatic passports and allowances have an idea how to keep Mnangagwa on the job much longer.

Morgen Komichi, chair of the MDC-T led by Douglas Mwonzora, said there is no need for general elections in 2023. The best way is a dialogue with Mnangagwa instead.

While no-one has openly shown interest in Mnangagwa’s job, the long-held belief in Zanu PF circles is that his deputy, Constantino Chiwenga, is eyeing the job. Chiwenga has not spoken publicly about it.

Only his estranged customary wife Marry Mubaiwa revealed her husband’s aspirations during a protracted court battle.

“He’s [Chiwenga] is surrounding himself with people who want to take advantage of him and his belief that his ascendancy to the position of presidency might be in jeopardy,” she said.

HARARE - President Emmerson Mnangagwa is on a push to eliminate any possible challenge from within Zanu PF for the 2023 presidential election ticket. The 79-year-old already seems to be in control. In April he successfully abolished the running mate clause...
Share via
x
More Information