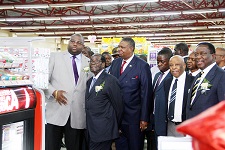 Mogae, who chairs the Choppies retail chain, opened three new supermarkets in December and the first ceremony was graced by Mugabe. The company now runs 29 shops in Zimbabwe, whose local franchise is 51% owned by one of Mugabe’s deputies, Phelekezela Mphoko.

Mogae, an Oxford-trained economist who led Botswana from 1998 to 2008, has long been a strong critic of Mugabe’s rule. In particularly scathing remarks in 2001 after Mugabe repossessed land from thousands of white farmers, Mogae accused the Zimbabwean leader of dragging down the entire economy of Southern Africa.

But on his Harare visit last month he stunned onlookers when he warmly shared the stage with the Zimbabwean leader while expanding his business empire.

The former president of Botswana has once again set tongues wagging, this time accusing Mugabe of violating the rights of gays and lesbians. Speaking in an interview in New York with a United Nations online publication, Africa Renewal, Mogae emphasised the need for reformed mindsets.

“President Mugabe has said that he hates homosexuals and is on record as saying they are worse than pigs and dogs. That is still his position. Leadership is not always about you, it is about people and often circumstances. I call upon African leaders to open up to second generation rights,” Mogae said.

Protecting the rights of homosexuals could not be likened to dancing to the tune of Western governments, he argued.

“While I admit that the West often push their agendas on Africa, which we must be wary of, I also believe that we must, as Africans, admit that the world is changing and we must move with the times. This means often abandoning some of our long-held convictions about life, if the need arises,” the former president said.

Mogae, winner of the 2008 Ibrahim Prize for Achievement in African Leadership, said he used to cling on to outdated beliefs and prejudices in the past.

“In my long interaction with LGBT [lesbian, gay, bi-sexual and trans-sexual] groups and extensive research, I have come to the realisation that we are limited in our knowledge and must be open to new discoveries. I have been converted; I used to hold the same beliefs as my counterparts.”

He praised South Africa for respecting the rights of sexual minorities and said Africa must do more.

“Some countries like South Africa have already paved the way and others are following slowly. Change takes time and often meets resistance in some quarters. One of the challenges we have in Africa is that even the traditional leaders or chiefs are against LGBT groups,” Mogae said.

Commenting on governments that complain of external interference, the former president of Botswana said murderous leaders could not hide behind the rubric of sovereignty.

“Sovereignty has limits like any other right. A leader cannot kill and harass his people and hide behind sovereignty. A true leader does not kill but protects his people.”

He added:”We still have leaders in Africa who think they are indispensable, larger than life and more important than their countries. That must stop. If a leader loses control, the world will and should intervene to save the people.”