From junior ranks to golf stardom 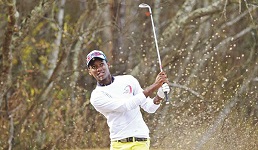 ZIMBABWE – The Zimbabwe Junior Golf Association (ZJGA) has, in Nick Price’s words, “one of the finest development programmes in the world”. The impressive number of players coming through the ranks bears testimony to Zimbabwe’s greatest golfer’s words.

Everyone knows of Price, the former world number one golfer, and multiple European Tour winners Mark McNulty and Tony Johnstone, who have made their mark and fortunes in the field of international golf.

David Leadbetter, a former Chapman junior, is the next best-known Zimbabwean golfer. He is arguably the most famous golf coach in the world, having coached Price, Ernie Els, Nick Faldo, McNulty and David Frost and a host of other top players in the world.

Leadbetter now runs an international chain of golf academies headquartered at the Champions Gate Golf Club in Davenport, Florida, US, while there are also branches in North America and in Europe and Asia.

Many of the other players who have come through the junior golf programmes in Zimbabwe have received their tertiary education in some of the best colleges and universities in the US due to their ability as junior golfers. They are all on golf scholarships which save their parents many thousands of dollars.

Other young players who are likely to follow in the same path include Kieran Vincent, Justin Kersten, David Amm, Tafadzwa Nyamukondiwa, Tarisiro Fundira, and Tadiwanashe Dzuda amongst others.

Playing in the US are former Zimbabwe Sportsperson of the Year Brendon de Jonge (US PGA Tour), Nyasha Mauchaza (Web.com Tour) and Bruce Mcdonald (PGA Tour Latin America), all of whom are making their mark and promoting the name of Zimbabwe in the world of golf.

New recruits to the professional ranks are Scott Vincent, who recently became the first Zimbabwean golfer to win on the Swing Thought Tour, a developmental circuit renowned for preparing upcoming professional golfers for life on the US PGA and Web.com Tours.

So how has Zimbabwe managed to produce so many successful golfers?

“The Mashonaland Junior Golf run what they call dailies and junior clinics during the school holidays where they get all these kids to come and try their hand,” Zimbabwe Junior Golf president Themba Sibanda told NewsDaySport in an interview.

“Obviously that’s where we have unearthed most of our talent and most players who are top professionals, amateurs and juniors such as Kieran Vincent, Scott Vincent, David Amm, and Tafadzwa Nyamukondiwa were identified through these programmes.”

“My wish is to see these programmes being implemented in other provinces so that we can increase the number of juniors, there are very few juniors playing and by playing I mean being members of local Golf Clubs.

“For the future of the sport to be on solid ground we need to have more juniors to be actively involved in the sport from the clubs’ provinces and later national team. For that to happen we need to have the parents to support and encourage their children to take up golf. We are fortunate that we have had parents who have been very supportive of their children and we hope other parents can learn from that,” he said.

Roger Baylis, the long serving head professional at Chapman Golf Club and coach for the Zimbabwe team said afterwards he was happy to see some of the other provinces represented in the team.

“We had players in the team from outside Harare which is quite pleasing as it shows that the game of golf is really taking off in the other provinces,” he said.

“The other pleasing thing to note was that from the team only one player from the six-member team had ever represented Zimbabwe in an international tournament before which makes the victory more special as it shows that the future is bright,” said Baylis.

Each year Zimbabwe junior golfers compete in the African qualifier for the Toyota Junior Golf World Cup, where Zimbabwe have qualified in the last two finals held in Japan.

A new inaugural All Africa Junior Girls Championship was held in Mombasa, Kenya in August and is expected to assist the Zimbabwe Junior Golf Association’s efforts to increase female participation in golf.

ZJGA also tries sends juniors to play in major tournaments in the US, with three budding golfers Vincent, Amm and Kirsten already in the US ahead of this year’s edition of the renowned Junior Orange Bowl International Golf Championship slated for December 26-30 in Miami, Florida.

A glance onto the Zimbabwe junior golf ranks undoubtedly depicts that there is potential to churn out another Price, McNulty or De Jonge in the near future if deliberate effort is not taken to support the budding golfers.

The number of juniors currently playing golf has worryingly dwindled in recent years as the corporate community has turned a blind eye on the amount of talent going to waste, but despite all the challenges Zimbabwe still boasts of one of the finest development golf programmes not only in Africa, but in the world.

From junior ranks to golf stardom

ZIMBABWE - The Zimbabwe Junior Golf Association (ZJGA) has, in Nick Price’s words, “one of the finest development programmes in the world”. The impressive number of players coming through the ranks bears testimony to Zimbabwe’s greatest golfer’s ...
Share via
x
More Information