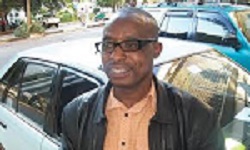 ZIMBABWE – In 2006, Zimbabwe was blessed with sungura musician Joseph Garakara whose album, Tapinda Tapinda made a shocking performance on local music charts.

The album contained the song Idya Banana which catapulted Garakara, a primary school teacher to fame. The lanky musician later released a video for the song, Idya Banana which featured raunchy dancers Mambokadzi.

He began his career on a high note, but his music fizzled out, despite churning album after album. However, Garakara believes that his latest offering has what it takes to claim top spot again.

In an interview with The Standard Style, Garakara, who boasts of six albums in his career, said he was not a spent force.

“I do not think that I have failed to release a song that beats Idya Banana. Most of the songs that I released are equally good and the fans say so,” he said.

“But the problem is with journalits who say so. If you listen to the song Zimbabwe, it has stolen the hearts of many. Another song that my fans say is better than Idya Banana is Zvinonaka Zviri Pakati on the album Chamboko Chewaya.

He said most DJs on local radio stations demanded money to “promote an album”.

“I agree Idya Banana put me in the limelight, but I do not agree that it is the best song I ever released,” he said.

“The fact that my career has never been the same has not been caused by not releasing a song that journalists deem better than Idya Banana, but there are a myriad of contributing factors like lack of publicity.

“There are times when some radio journalists would approach me and demand money so that they promote my songs.”

The 40-year-old musician won the Zimbabwe Music Award in 2006 for the song Idya Banana.

Garakara, who a few years ago graduated with a Media Studies degree, said he is currently looking for a job as a journalist or public relations officer.

“I am still into music a great deal. Music to me is not just an occupation, it’s something that I find hard to part with. I started involving myself in musical activities at a very tender age, when I was doing Grade Five. To stop it now I will be doing injustice to myself. I can’t dispute that sometimes I put my efforts elsewhere because of the simple reason that I should bring bread onto my children’s table,” he said.

ZIMBABWE - In 2006, Zimbabwe was blessed with sungura musician Joseph Garakara whose album, Tapinda Tapinda made a shocking performance on local music charts. The album contained the song Idya Banana which catapulted Garakara, a primary school teacher to f...
Share via
x
More Information