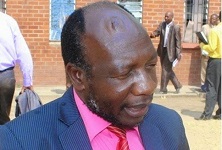 ZIMBABWE – A Chitungwiza Town Council employee allegedly connived with land baron, Fredrick Mabamba, to swindle a home seeker of a car worth $7 000 in a botched deal over a residential stand.

Gilbert Gono (31) who is a sewer operator and lives in Chikunguru Street in Chitungwiza, appeared before Harare magistrate Mr Tendai Mahwe.

He was facing fraud charges.

As part of his bail conditions, he was ordered not to interfere with witnesses and to reside at the address he gave to the court.

In addition he was also ordered to report twice a week on Mondays and Fridays at CID Serious Frauds.

The prosecutor Ms Idah Maromo, alleged that sometime in 2013 Moses Perera was approached by Gono who pretended to be an agent for United We Stand Housing Co-operative owned by Mabamba.

It is alleged that Gono told Perera  the cooperative had residential stands for sale.

The court heard that on the following day Perera was accompanied by Gono to Unit O Seke and Zengeza 5 Rockview area and viewed the residential stands which were allegedly on sale.

Perera was impressed by the stands and showed interest in buying them, it is alleged.

On July 25, 2015 Perera, Gono and Mabamba entered into an agreement of sale, which was signed by Perera and Gono, the court heard.

The State alleged that Perera gave Gono a Subaru, registration number ACT 5840, as payment for the two residential stands.

It is the State’s case that Perera was allocated the stands and Mabamba, as the chairman of the cooperative, signed the agreements of sale.

It is alleged that sometime this year Perera discovered that the stands he had paid for had been sold to other people.

The court heard that efforts to contact Gono were fruitless and Perera reported the matter to the police.

Gono was arrested and the total amount prejudiced was $7 000 and nothing was recovered.

ZIMBABWE - A Chitungwiza Town Council employee allegedly connived with land baron, Fredrick Mabamba, to swindle a home seeker of a car worth $7 000 in a botched deal over a residential stand. Gilbert Gono (31) who is a sewer operator and lives in Chikungur...
Share via
x
More Information