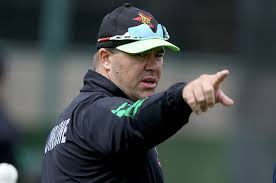 HARARE –  Former Zimbabwe captain Heath Streak has received an eight-year ban from all cricket activities after being found guilty of breaching the ICC Anti-Corruption Code, the international cricket governing body has said.

According to a statement from ICC General Manager – Integrity Unit, Alex Marshall said Streak breached the Code on several occasions.

“As a former captain and coach, he held a position of trust and owed a duty to uphold the integrity of the game. He breached the Code on several occasions, including facilitating the approach of four other players. At times, he also sought to obstruct and delay our investigation,” Marshall said in the statement.

However, Marshall said the offences did not affect the outcomes of any relevant matches, adding that Streak has agreed to assist with anti-corruption awareness campaigns.

“The offences did not affect the outcomes of any relevant matches and Mr Streak has agreed to assist the ICC anti-corruption education programme for which we are grateful.

“He has also expressed his remorse and contrition and entered this agreed sanction decision to avoid the need for a full disciplinary process. The sanction reflects this cooperation,” he added.

A summary of the events as outlined in the judgement by the ICC:

•In September 2017, Mr Streak began a WhatsApp conversation with an Indian gentleman, Mr X, at Mr X’s instigation, who said he was interested in organising a league in Zimbabwe and who asked Mr Streak if he would be interested as he could earn some good money from it.
•During these discussions, Mr X made it clear to Mr Streak that he was involved in betting on cricket, and also requested details of Mr Streak’s bank account, outside Zimbabwe, which Mr Streak provided.
•Mr Streak also made it clear in these discussions that he wanted to establish a T20 League in Zimbabwe and was passionate about furthering cricket in Zimbabwe.
•These conversations took place via personal email addresses and phones and not official ones, at both Mr Streak and Mr X’s request.
•During the course of these conversations, which lasted for a period of more than 15 months, Mr X asked Mr Streak to provide him with various information in relation to tournaments and matches he was involved with, in particular, in relation to the 2017 edition of the Bangladesh Premier League, (the “BPL”), Mr X asked Mr Streak to provide him with any links, namely team captains, or owners or players, in the BPL, saying they could earn good money as a result which they could invest in a T20 event in Zimbabwe.
•It appeared that Mr X wanted Mr Streak to provide him with contacts of players, team owners, etc, who Mr X could then approach for Inside Information, such as which team would win a match, in upcoming matches, Mr Streak provided Mr X with the contact details of three players in the BPL (including the details of a national captain), in circumstances where he knew, or should have known that Mr X may use these details to contact these players, and request Inside Information from them, for him to use for betting purposes.
•Further, in respect of two of these players, Mr Streak actually contacted the players to effectively vouch for Mr X, Mr X asked for player references for the Pakistan Super League 2018, in relation to the 2018 edition of the Afghanistan Premier League (the APL), Mr Streak facilitated the introduction of Mr X to one player, and attempted to facilitate the introduction of Mr X, to another player.
•Mr X also requested, and Mr Streak provide inside Information relating to matches in the APL.
•Mr Streak has accepted that passing on this information to Mr X amounted to Corrupt Conduct under the Code, Mr Streak has also admitted accepting two bitcoins from Mr X (subsequently converted into US$35,000 in cash).
•Mr Streak has accepted that, despite his obligation to do so, he failed to disclose receipt of this payment to the ICC ACU or any relevant Designated Anti-Corruption Official, Mr Streak has also accepted that, despite his obligation to do so, he failed to report any of the approaches he received from Mr X to engage in Corrupt Conduct to the ICC ACU or any relevant Designated Anti-Corruption Official.
•During the APL, Mr X gifted Mr Streak with a new iPhone for his wife, a gift which Mr Streak has accepted he did not disclose to the ICC ACU or the Designated Anti-Corruption Official.

•In December 2018, Mr Streak was advised by the ACU that he was to attend an interview with the ACU in January, during this call, Mr Streak was given notice that he would be required to present any phones and SIM cards that he had used in 2018 at the interview.
•Prior to his interview with the ACU, Mr Streak engaged in a series of WhatsApp messages with Mr X, knowing that Mr X himself had recently been interviewed by the ACU, these WhatsApp conversations between Mr X and Mr Streak related to what Mr X had told the ACU in his interviews.
•In these conversations, Mr Streak has admitted that he and Mr X effectively discussed what Mr Streak should say in the interviews to ensure that they both told the same story (a story which on occasions was not true) and consequently he has admitted that his conduct in so doing could be construed as misleading or obstructing the ACU’s investigation.
•Mr Streak also sought clarification from Mr X over the interview process and what Mr X had told the ACU on certain matters, additionally, following this conversation, Mr Streak has admitted that, at the instruction of Mr X, he deleted these messages from his phone before he attended the ACU interview, as well as deleting Mr X’s phone number from his phone.
•In so doing, Mr Streak accepts that his conduct in this regard was wrong.
•On the basis of the evidence obtained through its investigations, and the admissions made by Mr Streak to the ACU, on 28 March 2021, the ICC charged Mr Streak that he disclosed Inside Information to Mr X on various occasions, under both the ICC Code and various domestic Codes, in circumstances where he knew or should have known that such information may be used for betting purposes.
•In particular, he disclosed inside Information in relation to matches in the 2018 Tri-Series involving Zimbabwe, Bangladesh and Sri Lanka, the Zimbabwe v Afghanistan series in 2018, the IPL 2018 and the APL 2018.
•A breach of Code Article 2.3.3 in that he facilitated (or attempted to facilitate) the introduction of Mr X to four different players in circumstances where he knew or should have known that Mr X may have wanted to approach them to provide Inside Information for betting purposes.
•A breach of Code Article 2.4.2 in that he failed to disclose the receipt of the two bitcoin payment from Mr X and the gift of a new iPhone in circumstances that could bring him or the sport into disrepute.
•A breach of Code Article 2.4.4 in that he failed to report the various approaches he received from Mr X to engage in Corrupt Conduct under both the ICC Code and various domestic Codes (i.e. to provide Inside Information and/or to facilitate Mr X’s introduction to Participants to enable Mr X to seek Inside Information from them), including in relation to International Matches, matches in the 2017 BPL, the 2018 Pakistan Super League, the 2018 IPL and the 2018 APL.
•A breach of Code Article 2.4.7 in that he obstructed the ACU’s investigation through deleting his messages with Mr X and through contriving with Mr X about what to say in interview with the ACU and to delete messages and content from his mobile phone.
•By way of a letter agreement, dated 28 March 2021, Mr Streak formally admitted that he had breached the above Code provisions and waived his right to a hearing before the Anti-Corruption Tribunal.
•Relevant aggravating factors in Mr Streak’s case include the following – Mr Streak has failed to report not one but numerous approaches from Mr X to provide him with Inside Information for betting purposes; the conduct engaged in by Mr Streak, and as referred to above, was not an isolated incident but instead occurred over a long period; Mr Streak was or should have been fully aware when he passed on the Inside Information requested by Mr X, that such information may be used by Mr X for betting purposes, in breach of the Code.
•Mr Streak was, or should also have been fully aware that in passing on the contact details of other participants to Mr X (including the details of a current national team captain), Mr X may use those details to ask those Participants for Inside Information for betting purposes, thereby putting those Participants and their welfare, at risk under the Code.
•Mr Streak is an experienced former international cricketer and national team coach who, having participated in numerous anti-corruption education sessions, was fully aware of his responsibilities under the Code, as the former captain and coach of his own national side, as well as the coach of another national side, Mr Streak held a position of trust and owed a duty to uphold the integrity of the game, as he was someone who should have acted as a role model to cricketers in Zimbabwe, and elsewhere.
•The fact that there are several different examples of Mr Streak, and Mr X seeking to obstruct and/or delay the ACU’s investigation, it is not just a one-off occurrence.
•Relevant mitigating factors in Mr Streak’s case include the following – Mr Streak’s voluntary admission and eventual co-operation during his interviews with the ACU, Mr Streak has also undertaken to assist in any ICC education programmes, as well as in any further investigations or enquiries, Mr Streak’s prompt admission of his breaches following receipt of the Notice of Charge, Mr Streak’s remorse and contrition as expressed to the ACU (namely through his admission of the offending conduct when confronted with it during his interviews and his subsequent wish to assist the ICC and to enter into this Agreed Sanction decision to avoid the need for full disciplinary proceedings), Mr Streak’s previous good disciplinary record, the fact that the offences did not substantially damage the commercial value and/or public interest in the relevant matches and the fact that the offences did not affect the outcome of the relevant matches.

HARARE - Former Zimbabwe captain Heath Streak has received an eight-year ban from all cricket activities after being found guilty of breaching the ICC Anti-Corruption Code, the international cricket governing body has said. According to a statement from IC...
Share via
x
More Information