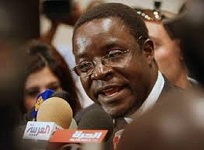 ZIMBABWE – On Saturday, the 25th of July 2015, and at around 12:45 pm, I got a call from a friend, Lovemore Banda, who quickly told me that mukoma George Charamba wanted to talk to me. I wondered why Charamba would call me using Banda’s line since he had my number.

After he asked for Prophet Emmanuel Makandiwa’s glass pulpit so he could use it at Grace Mugabe’s 50th birthday bash, I asked mukoma George why government and the First Family would want to be mischievous to the extent of feeling an urge to use God’s utensils at a secular bash as if they were king Belshazzar who, after getting drunk, ordered that golden and silver vessels from the temple be brought to him so he could drink his beer from them (Daniel 5: 2).

That mischievous act had fatal consequences and I felt I had a duty to dissuade my brother from treading on such slippery ground for God is not a respecter of earthly titles. But realising that the biblical reference did not make a lot of sense to him, I decided to use a metaphoric question rooted in black magic which I knew most of our government officials were comfortable with.

I asked Charamba, in vernacular; whether diviners shared their paraphernalia and immediately he laughed, gave Banda back his phone, end of story. I marveled, for I thought it put closure to mischief that could potentially attract persecution from the authorities for refusing them something. When that request was coming from the all-powerful First Lady, refusal to oblige could be fatal. We all know now that such refusal could spell the beginning of persecution on my person, the Prophet or the church.

I did not know that our little conversation would solve a mystery that has been lingering in media discourse for a long time. Despite suspecting, after analysing the lexicon, verbiage and Victorian English used in the column, that Manheru could be Charamba, I still doubted how on earth George would want to associate himself with the name Nathaniel knowing the real owner of the name and the nature of the relationship that used to exist between the real Nathaniel and George.

The other day I wanted some piece of furniture from Makandiwa the Prophet. Knowing as I did Jealousy’s association with the Prophet, I approached him for intercession. Mukoma, ko idzo nanga dzinokweretesana hakata here? Roughly translated, he reminded me diviners don’t share lots! That is Jealousy for you, forever packed with witty responses, all of them richly steeped in the tradition of our anonymous sages from a long past.

That bit solved the better part of the mystery around the identity of Manheru the columnist but opened up more questions as to why George would want to be secretly known as Nathaniel, Jonathan Moyo’s middle name, when there used to be such bad blood between the two to an extent that one claims to be holding on to some blood-stained fashionable garment from the other’s bedroom as bloody evidence of brutality in the domestic realm.

The motivation for keeping the bloody evidence is still a mystery to me, as it is to Manheru, and one wonders whether it is a ritualistic move, or an attempt at voodoo inspired blackmail, or worse still, a statement that the blackmailer and keeper of the bloody regalia (the old Manheru), would stand as a witness in a court of law, sometime when justice is for all, to testify against the new Manheru’s brutality in the domestic arena?

The other thing that always made me doubt Charamba was Manheru was the constant use of vulgar language, ribaldry and sexual innuendo in most of Manheru’s pieces. I have always known that Charamba could be unkempt, sometimes, but I had never known him for being uncouth thus I would find it very difficult to believe he was Manheru. But thanks to last week’s expose` I am beginning to understand George for who he is “ a sex-obsessed polygamist who sees in every woman a potential sex partner.

Manherus insinuation that all men who support Mujuru would end up sleeping with her and that stupid assertion that Mujuru will not sleep alone exposes the kind of folks that are circling around the First Lady and betrays their actual mission when they say Munhu wese kuna Amai.

Is it that these sex-obsessed charlatans, through the Munhu wese kuna Amai mantra are flocking to the mother to stand in for baba who, by virtue of old age, might have forgotten he has to perform some nocturnal traditional conjugal rites in the bedroom? Does the Munhu wese kuna Amai mantra entail spending sleepless nights in Amai’s arms, groaning and mourning whilst exposing the father’s nakedness?

Surely, with sons of such a sex-obsessed psych like Manheru, as an old man in the twilight of a long and eventful life, it might be unwise to think the Munhu wese kuna Amai mantra means Munhu wese kuna Baba. What you see isn’t always what you get and with uncouth sex-obsessed polygamous sons, it might be unwise to allow them unfettered access to one’s youthful wife, or even daughters.

For some time, I had thought that the mantra was some political jingoistic line, but thanks to Charamba, I have discovered that it transcends the realm of politics, straying into the domain of human procreatory entertainment.

I don’t want to go back to Charamba’s argument which formed the basis for attacking my article last week where I declared my proud association with People First and Former Vice President Joice Mujuru and stated that Mujuru has millions of supporters. There is no point revisiting the issue after Charamba confessed that he is a polemicist, he argues, thick-headedly, just because he has to take a different side even against common sense, empirical or qualitative evidence.

But I would like to correct some lies that Charamba and his gang have been propagating since the July 31, 2013 elections, that Mai Mujuru did not want elections. This is a lie that Charamba and his cohorts have been broadcasting to convince factionalists in Zanu PF that they worked with me in my constitutional court application to ensure the 2013 harmonised elections were held when they were constitutionally due, not when it was expedient for one political player or the other.

The lie has been repeated by Charamba and his factionalists to find favour with Mugabe so that they could get ministerial posts and, at the same time, forming the basis for several extortion related activities that these factionalists have been involved in since the court case. I am reliably informed that these factionalists have been moving from company to individual, to the president and all who cared, requesting for various sums of money ostensibly to pay Mawarire for the court case.

Some of them even approached me, wanting to extort the little money I work for, by claiming that Charamba was given $100,000 by the President to thank me for the court application and that they were dead sure he did not deliver the money to me. As such they now wanted me to give them something so that they could take me to the president. I flatly refused their offer and told them the constitutional court application had nothing to do with money, a presidential thank you or any such monetary reward for I did it as my duty to the country and the upholding of constitutionalism.

A cabinet Minister within this extortionist Manheru group was also moving around and approached a mining company wanting to draw $700,000 to give Mawarire for the court case but quickly ran away when the concerned company asked him to put his request in writing. Another ex-minister, one among the many Mujuru loyalists, was milked $80,000 by two serving cabinet ministers on the understanding that the money was being paid to Mawarire for the constitutional court application.

This is the context in which all those that claim to have worked with me in the constitutional court application should be understood. They are extortionists, crooks and conmen who suddenly saw, in my court application, another PSMAS that they could use to milk unsuspecting well-wishers, the President and cabinet colleagues.

If Mujuru did not want the 2013 elections and also did not want Mugabe to win, why is it that she addressed more rallies (43) for Mugabe than any other person who campaigned for Zanu PF in those elections? Even Mugabe himself addressed less rallies (22) compared to Mujuru during the campaign. In such a situation, who wanted the elections more?

I was also glad that Charamba exposed what the regime has been doing all along, spying on individuals they thought were People First. Charamba confesses that:

Mawarir’s membership announcement came a little too late for his actions. He had been watched and detected as he moved from newsroom to newsroom, negotiating placements of ads for the project.

It is a confession that exposes what the regime does to its opponents, some who are not as blessed as I am today to write about it. Think of Itai Dzamara. Was he watched and detected? Then what happened? Tell us George.

It is quite ironic that the state uses scarce resources, both human and financial, to track citizens that spooky columnists describe âas useless. I am glad, George, that my public pronouncement that I am People First spares state funds from being abused on unnecessary surveillance missions when people are starving in Chivi, Zaka and Bikita.

Mukoma George, people will vote for Mujuru in 2018, not because of some magic that Mawarire would have worked but because they are tired of a president whose spokesperson is alleged to have abused hundreds of thousands of dollars from an institution that should be benefitting its clients who are civil servants and elderly pensioners whose need for medical attention is usually more frequent than the need that the younger and well-fed Charambas have.

If you steal from the elderly, the sickly and honest contributors to a medical scheme and continue to serve close to the emperor, and nothing is done about your sins, would the people be wrong if they begin to hate and admonish the emperor for your sins?

It is these wronged people, their sons and daughters, relatives and colleagues, mukoma George, who have now realised that in Charamba, his boss and his administration, lay the real pitfalls that hamper development hence their realisation that Mujuru has the stamina and wherewithal to ramp the emperor up, for the good of the country and their livelihoods.

By the way mukoma George, I never worked for the Daily News in my life. It is a lie, just like the lie that Mai Mujuru owns 10 per cent of Daily News shares. It is these lies that Zimbabweans are made to believe everyday by people like you, but I am cool with it for I have been called worse things, like being a state agent, a member of the CIO.