ZIMBABWE – MDC-T Mabvuku legislator James Maridadi (48) was yesterday fined $300 by a Beitbridge magistrate after he was arrested by police detectives while shooting videos of customs officials and other travellers passing through the border.

Maridadi, of 42 Wyvern Ave, Belvedere in Harare, was convicted on his own plea of guilty to contravening a section of the Protected Places and Areas Act when he appeared before Beitbridge resident magistrate Miss Gloria Takundwa.

The magistrate also ruled that the two videos which the parliamentarian had shot using his Samsung S5 cellphone be deleted and that he gets back the phone.

In mitigation, Maridadi told the court that he was a church elder and a law-abiding citizen.

“I was aware that I was in a protected area but shot the two videos because I wanted to use them in registering a complaint with Zimbabwe Revenue Authority (ZIMRA) superiors over the shoddy services from the customs officers at the border,” he said.

Charges are that the legislator went to the border post yesterday at around 1am in the company of a relative, Natasha Jonga (24), who wanted to import a Toyota Fortuner bought from Singapore.

They then went through all the processes to facilitate the clearance of the vehicle under the returning residents’ facility.

Jonga was a student at the Free State University in South Africa.

During the processing of the documents, Jonga was requested to provide an affidavit from her parents to confirm her residence as per the requirements of the Customs and Excise Act since she does not own any property in the country.

Maridadi then became emotional threatening Zimra officials who were attending to them with unspecified action saying he had got assurance from his associates at the Zimra head office in Harare.

He then started shooting videos of customs officers and other travellers within the border post and was arrested by security personnel who confiscated his cellphone. 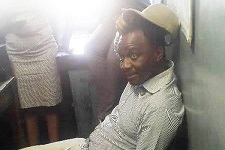 ZIMBABWE - MDC-T Mabvuku legislator James Maridadi (48) was yesterday fined $300 by a Beitbridge magistrate after he was arrested by police detectives while shooting videos of customs officials and other travellers passing through the border. Maridadi, of ...
Share via
x
More Information
x