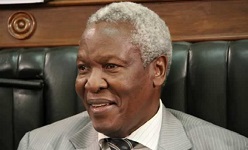 ZIMBABWE – There is need to formulate legislation that enshrines conditions of service that promote and motivate retention of human resources in the military, Defence Minister Dr Sydney Sekeramayi has said.

Minister Sekeramayi said this at Defence House in Harare on Monday in a speech read on his behalf by Secretary for Defence Mr Martin Rushwaya while welcoming a South Africa Defence Forces Service Commission delegation that is in the country to benchmark and share experience with their local counterparts.

He said crafting legislation was important in pursuance of a common desire to explore better conditions for human resources.

“In this endeavour, the thrust should not only focus on professionals, but also on the General Duty Front Line soldier who bears most of the exigencies of military life, including the primary and core duty of defending the sovereignty of our countries,” he said.

“May it be known to you at this juncture that the actions and operations of the ZDF are grounded by the Constitution of the country which provides for the requirement that defence forces be professional in their conduct of duty, hence the limitation that they should not affiliate to political parties and activities of trade unions and other non-military activities,” he said.

Minister Sekeramayi said the barring of members of the defence forces from non-military activities was meant to enable them to focus on discharging their constitutional duties.

“This limitation is designed to ensure that through professionalism and non-partisanship they defend the common cause of all Zimbabweans regardless of colour, creed, race or affiliation,” he said.

“We have come to Zimbabwe to learn and also share experience,” she said.

“Our commission was inaugurated in October 2013. It’s a new structure in the South Africa Defence Forces. Our role is to look on various aspects of our soldiers and their families and make recommendations to the minister.

“We look at the conditions of service, we also look at policies of defence forces and remuneration models and service benefits.”

Prof Van Harte said they came to Zimbabwe to study some of the conditions of service for military personnel in the context of the high unemployment rate in South Africa.

“We have issues we want to learn, how do you promote them, some (members of the South African Defence Forces) have stayed in the same rank for several years, they become demoralised,” she said.

The meeting was also attended by ZDF Chief of Staff Major-General Martin Chedondo.

ZIMBABWE - There is need to formulate legislation that enshrines conditions of service that promote and motivate retention of human resources in the military, Defence Minister Dr Sydney Sekeramayi has said. Minister Sekeramayi said this at Defence House in...
Share via
x
More Information