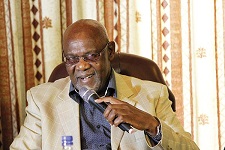 ZIMBABWE – Zapu president Dumiso Dabengwa has revealed that he warned President Robert Mugabe to step down almost a decade ago but he allegedly threw caution to the wind.

Speaking in an exclusive interview with the Daily News, Dabengwa said the current ugly factional fights devouring the governing party were signalling the end of an era.

The soft-spoken war veteran — who walked out of Zanu PF in disgust in 2008 to revive Zapu — said Mugabe was a victim of his own arrogance.

“It has come to that extent that it’s clear that Mugabe has completely lost control of his warring party,” Dabengwa said.

“This is what some of us tried to warn the president (Mugabe) about way back in 2007 that this is the best time for you to step down and allow for any other person in Zanu PF to take over.

“We told him then, ‘you have done what you needed to do, obviously you made mistakes along the way of which that had to be expected, you are a human being after all, but don’t allow the situation to get to a stage where you will have lost control because at that stage, everybody will be turning away from you and say we think this man must go.’

“When we finally decided to back him upon it for the presidential thing, that was the idea but when we failed to persuade him to leave the party to someone who could take over from him, he completely resisted that.”

The Zapu leader claimed it was one of the reasons he was forced to abandon the governing party.

He attributed Mugabe’s continued stay in power to “bad influence” from some senior Zanu PF hardliners who thrive on his presence as the president.

Dabengwa said he felt sorry for the nonagenarian, averring that he has no legacy to leave behind despite his role in the liberation struggle as well as President of Zimbabwe.

“But it’s unfortunate that as it is, he does not leave any legacy to the nation. With what is happening in the party, he certainly has no control whatsoever and that’s sad for somebody like him,” the former Home Affairs minister said.

Dabengwa — who last weekend was forced to call an emergency Zipra meeting following the battering of war veterans by police, prompting an apology from Mugabe — described the presidential act of contrition as bizarre.

“It’s very strange, it is the first time I have heard him say that. He has not made an apology on anything; maybe again it’s the issue of age that has taken its toll. Mugabe has never apologised for anything in his whole life,” said Dabengwa, pointing to a number of cases of gruesome State-sponsored violence against Zimbabwean nationals.

The Zapu leader said during his meeting with the ex-Zipra forces, they agreed that they need to be on the lookout for a possible civil war.

ZIMBABWE - Zapu president Dumiso Dabengwa has revealed that he warned President Robert Mugabe to step down almost a decade ago but he allegedly threw caution to the wind. Speaking in an exclusive interview with the Daily News, Dabengwa said the current ugl...
Share via
x
More Information