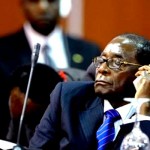 All that he is doing costs nation from all angles. It’s not that opposition parties are wrong when they call for Mugabe to retire from office.

What Mugabe did, was too embarrassing, presenting an outdated speech during the official opening of Parliament on Tuesday.

It raises more questions than answers, because for Mugabe to read the whole speech without even noticing or remembering that it was the same one he read three weeks ago shows that he is definitely sleeping on duty.

Imagine if it was a person like MDC-T leader Morgan Tsvangirai doing such a howler, it would have been a different story altogether. After Mugabe made such a blunder, Education minister Jonathan Moyo tried to defend him with flimsy reasons which are like telling us that the sky is green when we definitely know it’s blue.

As Zimbabweans, must we wonder why things are not changing for the better when we have a leader who sleeps on duty? Now we know the reason. President, you have shuffled the Cabinet so many times that it now time you called it a day so that a young and energetic person can take us to the promised land.

All those people who were clapping hands while you delivered the speech such as Oliver Mandipaka, Joseph Chinotimba and Mandi Chimene are bootlickers.

This time it’s not the West or MDC-T, but tell us that it’s the “Gamatox”. We are waiting for a comment like that to be delivered.

Tsvangirai – Prisoner of His Own Rhetoric