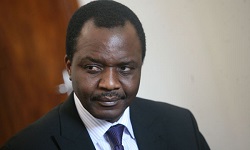 ZIMBABWE – Zimbabwe is failing to finance its national budget because of policy inconsistencies and a bloated Cabinet, legislators have said.

Legislators in both the National Assembly and Senate last week took turns to lecture Finance minister Patrick Chinamasa on how to mobilise and save money to finance government operations.

Chinamasa was told that the solution to the budget deficit was to cut the number of ministries and not just retrench civil servants who earned peanuts.

Mabvuku Tafara MP James Maridadi said given President Robert Mugabe’s penchant for creating new unnecessary ministries, “it will not be surprising if the country ended up having a ministry to represent sex workers”.

Maridadi said there was no need to have more than 75 ministers and their deputies in a small country like Zimbabwe with a population of less than 15 million.

“Zimbabwe is over-manned and the reason why we have policy inconsistencies is because we have so many ministers who are doing nothing,” he said.

“The reason we have so many ministries is because our response to issues is consumptive.”

“Very soon we are going to have a problem with prostitutes and [we] are going to create a ministry of prostitutes.”
Maridadi said it was unsustainable for a country with a gross domestic product of $10 billion to have more than 75 ministers and deputies.

“A country like the United States, with a budget of more than three trillion, is manned by only 15 ministers, excluding the president and vice-president, but Zimbabwe with a $4 billion budget has a bureau of more than 75,” he said.

“ If the minister [Chinamasa] is serious about cutting expenses, he must start by cutting the number of ministers we have.”

Jasmine Toffa (MDC proportional representation) said it was impossible to have economic growth when there was discord among ministries and when Chinamasa’s decisions were being crushed by other ministers.

“There cannot be economic growth when ministers spend most of their time fighting. There is policy inconsistency; for example, the Finance minister’s position on bonuses was overturned by the president,” she said.

“The newly-appointed Youth minister Patrick Zhuwao also sings from a different hymn book from the Finance minister, and it means things are falling apart as Zanu PF spends time on factional fights rather than economic development.”

Early this year Chinamasa announced that bonuses would no longer be paid to civil servants as government was struggling financially.

But Mugabe overturned the decision, resulting in Public Service minister Prisca Mupfumira announcing that bonuses would be paid after all.

Zhuwao then attacked Chinamasa, insinuating that his statement on bonuses would get him fired.

He again attacked Chinamasa for re-engaging the International Monetary Fund and World Bank in talks to deal with the debt issue and the controversial indigenisation policy as part of efforts to get financial support.

Zhuwao took this as an attack on the youths.

“We heard some top politicians saying we will re-look at indigenisation. This means they are saying I and all of you should go home and sit,” Zhuwao said then.

Toffa also took a dig at First Lady Grace Mugabe, saying her statements to the effect that Mugabe would continue to rule even if he became blind or was wheelchair-bound because of age, scared investors away.

“There can’t be economic growth when a First Lady thinks that she is the country’s second in command and more senior than even the vice-presidents and also says a special wheelchair will be given to Mugabe to rule from,” Toffa said.

While Zimbabwe continues to labour under a bloated Cabinet, Chinamasa has announced measures to cut down on the civil service as a cost-cutting measure.

MPs said a bloated Cabinet translated into a huge bill in the form of ministers’ expensive lifestyles that they became entitled to upon appointment.

ZIMBABWE - Zimbabwe is failing to finance its national budget because of policy inconsistencies and a bloated Cabinet, legislators have said. Legislators in both the National Assembly and Senate last week took turns to lecture Finance minister Patrick Chin...
Share via
x
More Information