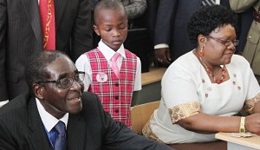 ZIMBABWE – HARARE – Supporters of former Vice President Joice Mujuru and her People First project say they are receiving death threats for campaigning for her and the movement.

Victims of the terror campaign told the Daily News yesterday that the blood-curdling threats against them had been a big problem particularly in Harare and Manicaland province.

People First spokesperson Rugare Gumbo also confirmed that the movement’s supporters were being stalked and harassed to prevent them from engaging in their political activities.

“We are not surprised that the enemies of democracy are employing these primitive methods of intimidation, threats and stalking our disciplined supporters who have not done anything wrong. Fortunately, all this will not work.

“We are also aware that everyone in the post-congress Zanu PF, including President Robert Mugabe, is panicking because of People First, hence the reason they are abusing their incumbency with State security agents, attempting to infiltrate us.

“But we know that what attracts people is to give them hope. Zimbabweans have suffered enough and so we will not be intimidated and will remain resilient as we work to extricate the country from the mess that it finds itself in, thanks to Zanu PF’s misrule.

“We will continue to do what we are doing because we are clear about the direction which we are taking and nothing can stop us,” a resolute Gumbo said.

People First coordinator for Hatfield constituency in Harare, Juliet Gutsa, said the death threats had started about two months ago, causing many activists to go underground.

She said she had personally received such calls from an unknown number, warning her against mobilising support for Mujuru.

Gutsa also said that unidentified men had also visited her former husband at the University of Zimbabwe where he works and threatened him after he refused to divulge details of her political activities and place of residence.

“At first the caller, a woman who refused to identify herself but kept on pestering me for about three days, asked me to tell her my place of residence.

“But when I refused, insisting that I wanted to also know about her, she changed her modus operandi as I started receiving calls from a male voice instructing me to stop my political activities or risk disappearing the (Itai) Dzamara way,” the visibly-distressed Gutsa said.

Dzamara is the journalist-cum-democracy activist who was abducted by suspected State security agents early this year after calling for Mugabe’s resignation. He has not been found to date.

“I then heard from my ex-husband that three men had come to his work place inquiring about me, saying I was wanted by police over a political case.

“I then took the matter to my superiors who followed up the issue and found out that the number belongs to the security structures in Mbare.

“I am worried about my security because a colleague in Manicaland Province has also told me that she has been receiving similar calls. I will however, not be cowed because we are determined to support Amai (Mujuru) and we are encouraged by the response the People First project is getting.

“I have never seen anything like this before. Women who have previously shied away from politics are coming out of their shells in support of Amai,” Gutsa added.

A few months ago Bhasikiti apprehended one of the agents who was allegedly on a spying mission at his residence and farm.

And only last weekend, Mugabe himself repeated the post-congress Zanu PF’s untested claims that Mujuru and her allies wanted to oust and kill him, and that they were corrupt individuals who had abused their positions while still in high office.

But Mujuru dismissed the claims as lies on Monday, and dared authorities to haul her to the courts if they believed their propaganda.

Mufuka: Zimbabwe and the false gods

ZIMBABWE - HARARE - Supporters of former Vice President Joice Mujuru and her People First project say they are receiving death threats for campaigning for her and the movement. Victims of the terror campaign told the Daily News yesterday that the blood-cur...
Share via
x
More Information
x