ZIMBABWE – Players in Zimbabwe’s informal sector have often complained of harassment by both municipal and the Zimbabwe Republic police despite the valuable contribution that they make to the country’s economy, with government failing to recognise them as an important cog in the country’s fight to turn around its fortunes.

And the no show by both the government and officials from the City of Harare at an all stakeholders’ conference in Harare recently seemed to confirm the bad blood that exists between the two institutions on one side and the informal workers, who had hoped that the indaba would help find solutions to the problems bedevilling the sector.

The informal sector workers, under the banner of the Zimbabwe Chamber of Informal Economy Associations (ZCIEA), had anticipated that engagement with the government and local authorities would help change perceptions about informality.

The government should have also recognised the undeniable shift of the place of work from the formal to the informal in line with ILO recommendation 204 of 2015 which speaks to processes of transitioning the informal economy through human rights-centred means that promote decent work and socio-economic justice.

It would have at least helped the authorities realise that the informal sector workers were legitimate economic players and not criminals, and afford them the respect that they deserve.

The workers, the majority of them vendors who ply their trade in the streets, have always viewed the local authorities and government as the biggest obstacle to the growth of the sector, and their absence from the conference was a major blow to their efforts towards meaningful engagement.

“We had hoped that we would engage with the authorities and demand from them our full rights as enshrined in the Constitution of Zimbabwe. We don’t like the way we are being treated. We demand the de-politicisation of our work by any political party,” ZCIEA president Lorraine Sibanda said.

Over the years, instead of being seen as a vital cog in the country’s economic development, informal workers, especially vendors, have been used as political pawns, with those in positions of authority using political muscle to make inhumane decisions that protected or advanced their personal interests.

“The serious levels of criminalisation of the informal economy work space which have also become a political muscle hybrid must stop. This has negatively impacted on the members we represent, as they have become vulnerable and cannot access operational space as most are discriminated against, usually on political grounds,” she added.

ZCIEA, Sibanda said, was worried by the gross violation of human rights by the local government ministry, which continued to preside over the harassment of informal workers through demolition of their structures.

“We therefore, demand that the government of Zimbabwe help sustain the livelihoods of ordinary Zimbabweans by providing decent working spaces with market value and ablution facilities for informal economy workers. Informal economy traders put money in the banks, pay bank charges, pay school fees, pay VAT and therefore, should be allocated space in the national budget and its consultation processes,” she said.

Chitambara said the fact that Africa’s richest man, Nigeria’s Aliko Dangote, who is worth over US14 billion, started as an informal worker, was good enough reason to believe that the informal sector had potential to create more jobs and unpack and create wealth, adding there was a need to maximise its potential.

“Currently there are no incentives for players in the sector because the cost of doing business is unsustainable. The biggest hindrance to development is the shortage of power. The government has to invest in energy and reduce tax to avoid invasion from players.”

Employers’ Confederation Of Zimbabwe (EMCOZ) CEO John Mufukare said the future of Zimbabwe’s business was in the hands of the informal sector workers, adding they should create synergies with those in the formal sector.

He said informal workers needed to come together and form wholesale groups that would supply goods in bulk to those in the formal sector. This he said, would ensure that there were no clashes as they would no longer compete for customers.

“Our future is in the informal sector, if they can supply quality goods, they can supply much better than those currently supplying us now because they do not have overheads and will be able to supply at much lower prices,” he said.

Local Government Minister Saviour Kasukuwere, Finance Minister Patrick Chinamasa, and Harare mayor Bernard Manyenyeni, who had all been invited to the conference, did not turn up and also failed to send any representatives.

Kasukuwere has in the past refused to meet the informal workers, saying they were trying to blackmail the ruling Zanu-PF party and that the revolutionary party would not accept “blackmail votes”. 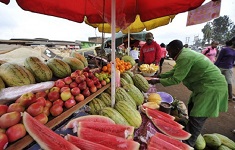 No love lost between Zimbabwe government and informal workers

ZIMBABWE - Players in Zimbabwe’s informal sector have often complained of harassment by both municipal and the Zimbabwe Republic police despite the valuable contribution that they make to the country’s economy, with government failing to recognise them...
Share via
x
More Information
x