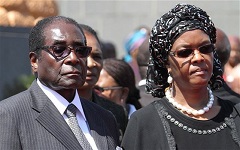 ZIMBABWE – HARARE – An angry President Robert Mugabe once again waded into Zanu PF’s seemingly unstoppable factional and succession wars, starkly telling hordes of his supporters at Harare International Airport that no one in the burning ruling party could stand in the way of the wishes of his controversial wife Grace.

Speaking on his return from New York, where he had gone to attend the United Nations General Assembly — and as deadly factionalism continues to disembowel his party, with Grace at the heart of the anarchy — the nonagenarian railed at his wife’s Zanu PF detractors.

Mugabe appeared to be particularly incensed by reports that some senior party officials in Manicaland, who are allegedly aligned to embattled Vice President Emmerson Mnangagwa, were trying to put spanners in the works of an impending visit to the troubled province by Grace.

“We hear Amai Mugabe wants to go to Manicaland this time because she does not want to interact with people from towns only, with some saying she must come to Sakubva but the acting provincial chairperson (Samuel) Undenge also wanted her in Chimanimani.

“The party must also be visible in the chairman’s home area,” Mugabe said, ominously taking a position in the squabbles, just as he did when former Vice President Joice Mujuru and her allies were brutally purged from their ruling party and government positions late last year.

With the post-congress Zanu PF bitterly-divided between factions aligned to Mnangagwa on one hand, and to Grace and a group of the party’s ambitious Young Turks known as the Generation 40 (G40) that is believed to be fronted by Local Government minister Saviour Kasukuwere, Mugabe’s statement was a clear boon for the ever-scheming G40 who are said to be rabidly anti-Mnangagwa.

The nonagenarian’s statement was also a personal coup of sorts for the beleaguered Undenge, an alleged key G40 member, as the Energy minister has been under immense pressure on two fronts — with regards to the country’s crippling electricity blackouts and the factional fights in Manicaland where provincial political godmother, politburo member Oppah Muchinguri-Kashiri has been causing him sleepless nights.

Although Muchinguri-Kashiri was part of the core group of Zanu PF’s leading lights who, together with Grace and the G40, led the annihilation of Mujuru and her allies, she is now seen as belonging to the Mnangagwa camp that is battling the G40 for control of the party after Mugabe.

Mugabe also took the unusual step yesterday of paying homage to the security sector, particularly the police and intelligence agents.

“We want to thank the police and Central Intelligence officers for the work they are doing in ensuring peace in the country … (as) we will always have weevils in our midst.

“Many people come to you saying you must back so and so for this or that post. Why must you back that person? Zanu PF has laws and we support the party and the leadership that you chose, not individuals who want to impose themselves on you and causing confusion in the party,” Mugabe said in remarks that appeared to be targeted at Mnangagwa and his supporters.

The nonagenarian’s remarks on Grace’s impending visit to Manicaland come amid reports that politburo members and Cabinet ministers from the province had allegedly snubbed Muchinguri-Kashiri on Wednesday, after the Water minister had apparently summoned them to her office in a supposed bid to ensure Grace would hold her rally in Mutare instead of Chimanimani as initially envisaged.

Grace’s whirlwind tours, similar to the ones she held before the ouster of Mujuru last year, have raised eyebrows in Zanu PF, especially among Mnangagwa allies who are wary of the motive behind the latest crusade.

With elections to choose a substantive Manicaland provincial chairperson set to be held before the end of the year, insiders said Muchinguri-Kashiri and provincial minister Mandi Chimene were backing rival candidates Mike Madiro and Undenge respectively.

Symbolically, the district that would host Grace when she visits Manicaland would have an upper hand when it comes to the elections as her visit would be regarded as an endorsement for one of the two the candidates.

Muchinguri-Kashiri reportedly wants the venue for Grace’s visit to be Sakubva Stadium in Mutare, Madiro’s stronghold, while Chimene is said to prefer Cashel Valley in Chimanimani — Undenge’s home district.

“All politburo members from the province were called for a meeting which was set for Muchinguri-Kashiri’s office at 5pm, but nobody turned up because people do not trust each other anymore, especially after the leaked tape in which she was recorded discussing factional politics.

“So we all just chose to be cautious, lest we are accused of being involved in another Tsholotsho debacle,” a politburo member who requested anonymity told the Daily News yesterday.

“I don’t know what the meeting was about because I did not go there, although I was invited. I am, however, informed that the meeting did not take place as people did not come,” another politburo member said.

Contacted for comment, Muchinguri-Kashiri was said to be in a series of meetings,  with her aide promising that she would call back — which had not happened at the time of going to press.

“Whatever they will agree on as the venue for Dr Amai’s (Grace’s) visit may not matter at the moment because the damage is already done. Supporters are confused and they are not sure if Amai is going to still come.

“They do not know whether to prepare to go to Mutare or Chimanimani so many may choose to stay at home,” a provincial executive member said yesterday.

In his Harare Airport address yesterday, Mugabe also said Undenge was not to blame for the electricity shortages that are ravaging the country.

ZIMBABWE - HARARE – An angry President Robert Mugabe once again waded into Zanu PF’s seemingly unstoppable factional and succession wars, starkly telling hordes of his supporters at Harare International Airport that no one in the burning ruling party c...
Share via
x
More Information