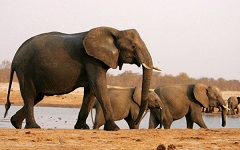 ZIMBABWE – It took me a long time to feel like I was in Zimbabwe. I had braced myself for a very different experience than the one I was having. If I’m honest, I was expecting to have to deal with nasty officials, hawkers, and dodgy taxi drivers.

But instead I was standing next to Victoria Falls and I felt at peace. Only six hours ago, my flight from Johannesburg had just landed on the newly extended 4,000m runway, which felt as smooth as the streams of water cascading down this spectacular waterfall.

As I was driven through the town, life seemed to be continuing as usual. Zimbabweans were queuing up for the bank, spending their afternoons shopping and I even saw a cafe, In Da Belly Café, that I made a mental note to return to later. When I arrived, I was recommended an “anti-malarial” gin and tonic (apparently, mosquitos are put off by the smell of the quinine) to help me settle into my sumptuous surroundings at the Victoria Falls Safari Club.

Don’t get me wrong, I know things aren’t as perfect as they seem. Depending on which lens you examine Zimbabwe through, it is either a victim of colonial oppression or a chronically mis-managed, brutal dictatorship. “Fantastic tourist spot” isn’t the first definition that comes to mind.

Famously, the inflation rate hit 79bn per cent a month in November 2008. This was caused by the post-colonial land repatriation enforced by leader Robert Mugabe, or “Bob” as he was casually referred by the white Zimbabweans I spoke to during my three day visit. After the financial crash came a lot of violence and troubled elections.

In 2009, Zimbabwe attempted to stabilise the situation by adopting the US dollar and, consequently, a number of investors have swooped in, seeing huge growth potential in the tourism industry.

The new Victoria Falls airport is a good example. The deal is a “build, operate, toll” agreement made with China, which pays for the build and earns a toll for 25 years, after which Zimbabwe is left with the airport to enjoy the wider economic benefits that greater accessibility brings.

Among the companies benefitting is Africa Albida Tourism (AAT), who’ve invested in upgrading and extending its properties in Zimbabwe and across the border in Botswana.

After its Victoria Falls Safari Club, I moved on to AAT’s Ngoma Safari Lodge on the Chobe River, which is around two hours drive away in Botswana. This was my first safari experience and it was undeniably a pampered one. Both hotels were located on ridges offering fantastic vistas over small lakes that attract local wildlife. While I was there, I only had to peer out of my window to see elephants, crocodiles, baboons, impala, zebras, lions, and all manner of bird life.

There is something extremely calming about watching wild animals from a veranda. Perhaps I was being self-consciously well-mannered because I felt like a guest on their territory. Or maybe it was the cold Zambezi beers taking hold.

But I only had three days to explore so I thought it was time to wander over to one of the seven natural wonders of the world before I fell asleep. Victoria Falls is known as Makololo, or Thundering Smoke, in local parlance. The Zambezi river dramatically falls off a mile long cliff, a deep wound in this otherwise serene landscape, and the effect is powerfully mesmerising.

If this isn’t enough to induce an adrenaline spike, helicopter rides, bungee jumping and gorge swings are all available and you can even tackle white water rafting if you’re feeling brave. I hopped into a helicopter instead, laughing at the gorge swingers below from the safety of my steel and glass bubble.

Above the falls, big, flesh-eating crocodiles lurk, while the gentler types are at the bottom, looking for small fish to snack on. The hippopotamuses here are more deadly than their gentle demeanour suggests, killing more humans every year than lions, elephants, leopards, buffalo and rhinos combined. Even the baboons, who look friendly enough, will smash up your hotel room in the pursuit of sugar if you leave the door open, I’m told.

Evenings at Victoria Falls Safari Lodge are varied to say the least. One day I dressed up for a delicious a la carte meal, while the next evening I was told to dress for a “walking safari, followed by a Boma”, whatever that meant. Pleasingly, it started with snacks and another gin and tonic, this time while crouching in a game hide.

I chatted to my guide in a stage whisper as warthogs and the odd bird went about its business, but I had a dinner appointment to keep so called time and walked back to the Jeep. As my thoughts turned to the prospect of steak, I was suddenly completely surrounded by a herd of about 30 elephants. My guide ushered me back into the hide for safety. Now this was more like it.

Thankfully my guide was made of sterner stuff and found a gap in the herd to creep out of and fetch the Jeep. Secretly pleased, I arrived late for the Boma which turned out to be a massive buffet followed by a frenetic drumming session while I was trying to digest it.

My next stop is the Chobe National Park in Botswana. According to AAT, Ngoma Safari Lodge is the jewel in its crown, which is odd because it’s also really hard to find. We had to take a random, unmarked turn into the bush, then drive for 10 minutes along a sandy track before the hotel came into sight.

My room came with another jaw-dropping view of the Chobe River and Namibia and the National Park is full of wildlife. With little time left to explore, I spent my final day here enjoying a game drive in an open-sided Jeep and a water safari on a large, flat-bottomed boat.

While all the Big Game you’d expect were out in force, the birds were an unexpected highlight. I was more blown away from seeing a lilac-breasted roller take flight than I was seeing a 10ft crocodile.

Though the region is still fraught with tensions, it would be a shame if those prevented the world from seeing such natural wonders like Victoria Falls, which deserves a place on everyone’s bucket list.

The new airport and tourism push may be a one-off, another broken promise in Zimbabwe’s unfortunate history. Here’s hoping it’s a new dawn and there are many more to come in this troubled part of the world.

Somak Holidays is offering an itinerary including two nights staying at Victoria Falls Safari Club, and two nights at Ngoma Safari Lodge, in Chobe National Park, as well as flights and transfers, from £2,850pp. To book your African safari holiday, call Somak on 020 8423 3000 or visit somak.co.uk.

Zimbabwe says to clear $1.86bn arrears by next April

On safari in Zimbabwe and Botswana

ZIMBABWE - It took me a long time to feel like I was in Zimbabwe. I had braced myself for a very different experience than the one I was having. If I’m honest, I was expecting to have to deal with nasty officials, hawkers, and dodgy taxi drivers. But ins...
Share via
x
More Information
x