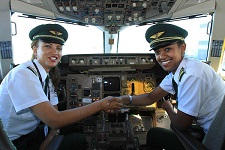 ZIMBABWE – On Nov. 18, the Ethiopian Airlines flight from Addis Ababa, Ethiopia to Bangkok, Thailand had something different to it: it was completely operated by a female crew, from ground operations all the way to the sky. Captain Amsale Gualu was assisted by a female co-pilot, Selam Tesfaye, and by an all-female cabin crew and female ground staff. This was a first in the history of the airline—and likely in that of African aviation.

“Here in the continent of Africa, we are lagging behind in women empowerment,” Ethiopian Airlines CEO Tewolde Gebremariam wrote in a statement. He also noted that “women are the continent greatest untapped resource,” and that the decision to have a fully female-operated flight was primarily “an opportunity to inspire young African female students to believe in their dreams”, with an eye to the skill gap for aviation professionals.

Ethiopian Airlines is not alone in the continent in the effort of promoting women’s involvement in the airline business. On Nov. 13, Air Zimbabwe too had a female operated flight—while it wasn’t intercontinental, and it wasn’t entirely female operated, the flight from Harare to Victoria Falls had an all-female cabin crew, with Captain Chipo M. Matimba assisted by Captain Elizabeth Simbi Petros, as the company announced on Facebook.

Yuan use may benefit Zimbabwe: Experts