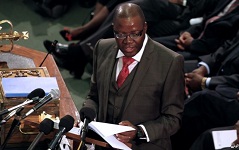 ZIMBABWE – Zimbabwe’s Constitutional Court began its year Wednesday with a request from 15 death row prisoners for their sentences to be commuted. Rights lawyers are hoping the death penalty will be outlawed in Zimbabwe this year.

The lawyer for the 15 said they have been waiting for their executions for periods ranging between four and 20 years.

All have been convicted of murder or treason, which carry capital sentences in Zimbabwe.

Their lawyer, former Zimbabwe finance minister Tendai Biti, said after this case is over he wants the death penalty completely outlawed. “When someone has been sentenced to death, he cannot be subjected to death row for so long and wait for so many years on death row.We are saying that is unconstitutional.

The vice president Biti refers to is Emmerson Mnangagwa, who opposes the death penalty.

In 2013, Mnangagwa said he would “rather resign than sign certificates for executions.” “We have 89 people on death row.Two of them are women. They are lucky, I did not sign the papers for their execution. At the end of the day, we have commuted [their sentences] to life imprisonment,” he explained.

Since those comments, the number of prisoners awaiting execution has risen to more than 100.

Biti said a ban on the death penalty must come from the courts, instead of depending on the benevolence of one politician.

On Wednesday, he argued that Zimbabwe’s constitution protects everyone, including convicted prisoners, against torture or cruel, inhuman and degrading punishment.

He said the long periods his clients have spent in prison, never knowing when they might be hanged, amount to such punishment. Death-row prisoners in Zimbabwe are not told in advance of the date and time of their execution.

ZIMBABWE - Zimbabwe’s Constitutional Court began its year Wednesday with a request from 15 death row prisoners for their sentences to be commuted. Rights lawyers are hoping the death penalty will be outlawed in Zimbabwe this year.  The lawyer for the 15...
Share via
x
More Information