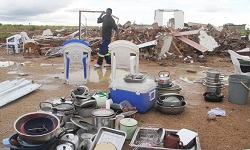 ZIMBABWE – The demolition of houses along Joshua Mqabuko Nkomo Expressway in Harare following an order by President Robert Mugabe has condemned hundreds of families into destitution, with thousands of dollars’ worth of investments lost.

Hundreds of houses have been razed down at Arlington suburb near Harare International Airport.

The health impact of the action is now beginning to be felt as victims of the demolitions who have been living in the open without clean water or shelter fall sick.

Zivanai Manhanhatu, one of the many people whose houses were razed to the ground, salvages kitchenware and window frames yesterday. Picture: Aaron Ufumeli

Since the demolitions two weeks ago, Jean Pierre Dusabe and his family have been sleeping in the open after his five-bedroomed house valued at over $100 000 was demolished together with several others at the instigation of Mugabe.

“Since the demolitions, I have been sleeping outside in the rubble and remains of my house, or in my car because we have no alternative accommodation.

“My daughters are both currently suffering from severe flu and my other daughter has developed bronchitis,” Dusabe said.

“My seven-month pregnant wife has also had to visit the clinic since the demolitions as she has been suffering from stomach pains and is anxious about our unborn baby.

“I am also concerned about the welfare of my niece who has a problematic chest condition.”

Dusabe has been unable to work since the demolitions.

“I do not have access to bathing facilities and I cannot leave my family without knowing what will happen to them,” he said last week.

“We do not have anymore money to use to resettle elsewhere, so we have nowhere to go,” Dusabe said.

He said he now feared “irreparable harm” to his family as his sick children and pregnant wife were now homeless and living in the rubble of their house where they have been exposed to vagaries of the weather in the middle of a rainy season.

Dusabe and John Peter Mutokambali have since taken their case to the High Court where they are suing Local Government minister Saviour Kasukuwere, Lands minister Douglas Mombeshora and the City of Harare for damages.

The two — like many others whose houses were demolished — bought and developed their stands along the Joshua Mqabuko Nkomo Expressway from Nyikavanhu Housing Co-operative, a properly registered entity.

Dusabe said in June 2013, he purchased 2 000 square metres of land from Nyikavanhu Housing Co-operative and invested $75 000 in building a five-bedroomed house with two bathrooms and a master bedroom with en suite bathroom, two lounges, one kitchen and two verandas.

He started living at the house in early 2015 and was staying there with his now pregnant wife, two daughters, aged four and three respectively, his sister-in-law and her daughter, his wife’s nieces, one of whom has a chest problem and is on medication.

Dusabe claims movable property worth over $8 000 was damaged during the demolition.

He had been living in the house with his wife, two sons, two brothers, sister-in-law and four other relatives.

Mutokambali said he lost movable property worth $10 000 in the demolitions and was now sleeping in his car while his family was temporarily in the care of friends.

“My brother has unfortunately fallen critically ill since the demolitions, vomiting continuously and was recently admitted to hospital.

“I have not been able to go to work since the demolitions as I have not had anywhere to bath and have had to remain on site to protect our property,” Mutokambali said.

The Zimbabwe Lawyers for Human Rights (ZLHR) has since written to the Zimbabwe Human Rights Commission on behalf of the two, asking the watchdog to investigate the matter.

“Despite this cloak of legality, on January 21 2016, functionaries of the City of Harare conducted an extensive demolition exercise in which over 100 homes, including those of our clients, were destroyed and residents, including children, the ill and the elderly, have been left sleeping outside in the rubble without adequate shelter in the middle of the rainy season,” ZLHR wrote.

“The situation our clients find themselves in is pitiable. Jean Pierre Dusabe has a pregnant wife, three other adults and five children under his care, three of whom suffer from serious medical conditions which are aggravated by harsh weather conditions.

“John Peter Mutokambali also had six adults and four children under his care and his brother has fallen critically ill since the demolitions.”

The lawyers’ group added: “Our clients’ plight is representative of the devastating humanitarian disaster faced by the large number of residents of the estate, whose situation is only aggravated by the fact that no alternative accommodation has been offered.”

The letter said the two and many others were yet to be allocated new stands despite assurances and media reports that victims were being taken to Stoneridge Park.

ZLHR said the commission should carry out an on-site visit and observe the extent of the devastating impact of the actions of the authorities.

Thousands of families have been left homeless since Harare City Council started a blitz against illegal settlements last year.

The majority of the victims are members of Zanu PF aligned co-operatives who were allocated land by the government as the ruling party sought to regain control of the capital.

The government last week said it was banning housing co-operatives.

ZIMBABWE - The demolition of houses along Joshua Mqabuko Nkomo Expressway in Harare following an order by President Robert Mugabe has condemned hundreds of families into destitution, with thousands of dollars’ worth of investments lost. Hundreds of house...
Share via
x
More Information