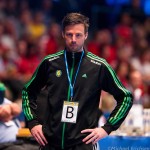 ZIMBABWE – TOP Swedish handball coach Henrik Signell and fitness trainer Elvir Rakovic are in the country to conduct coaching courses to assist the development and growth of the sport in Zimbabwe.

They will conduct a Level One coaching course for coaches drawn from Mashonaland West and a Level Three course and fitness training programme targeting coaches and fitness trainers from across the country.

Signell and Rakovic arrived in the country on Tuesday night and will hold their first classes today at Jameson High School in Kadoma.

The courses will run up to Sunday.

Signell said he will be focusing on the basics of the sport having watched the Zimbabwean teams playing at the Partille Cup in Sweden over the years.

“During the first days it’s about basic training, that is how to pass, how to shoot and how to defend. You cannot start with the six by six, the whole team if the individuals don’t know for example how to shoot.

“We have to start there and also when you are younger, lets say about eight to 14 years, your body and brain is more effective to learn technique training and co-ordination, therefore we start with that,” said Signell.

Signell, however, said they have to assess the level and standard of the players and coaches to see if they need to make adjustments to their programme.

“It’s not clear for us what is Level One and what’s Level Three for you because we have to see and find out where the level and standard is. Level Three and Level One in Sweden may not be the same here.

The Swedish coach, who is involved with the Partille Cup, said he has seen the Zimbabwean teams competing and there is need to work on the technical ability of the local players.

“We will also see the level and the standard so we can tell the coaches what they need to practice and hopefully we can start something together between Sweden and Zimbabwe for longer terms.

“They (Zimbabwean players) want to learn, they are hungry to learn, but there are some things they have to practice a lot especially individual techniques and also fitness, co-ordination and organisation.

“During their stay last year in the Partille Cup they improved a lot for those two weeks so I am positive to the future training,” said Signell.

Rakovic, who is going to be working with fitness trainers, said physical fitness was key.

Zimbabwe Handball Federation president Amon Madzvamuse said they hope the courses will complement their efforts to develop the sport.

ZIMBABWE – TOP Swedish handball coach Henrik Signell and fitness trainer Elvir Rakovic are in the country to conduct coaching courses to assist the development and growth of the sport in Zimbabwe. They will conduct a Level One coaching course for coaches...
Share via
x
More Information
x