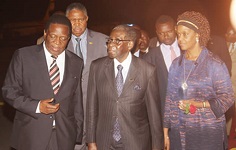 ZIMBABWE – Hardly a week since his return from India where he nearly fell, President Robert Mugabe Wednesday left for Tanzania for the inauguration of that country’s newly elected leader, John Pombe Magufuli.

Magufuli is independent Tanzania’s fifth president while Mugabe has been in power since 1980.

His (Mugabe) friend and mentor, Tanzania’s first president, Julius Nyerere, stepped down in 1985.

He was seen off at the Harare International Airport by government ministers including VPs, Emmerson Mnangagwa and Phelekezela Mphoko.

Mugabe will join several heads of state and government as well as Nigerian prophet TB Joshua who arrived in Dar es Salaam two days ago for Magufili’s inauguration.

President Mugabe was recently in Asia where he attended the India-Africa summit held in the capital, New Delhi.

Mugabe was going to greet Modi when he missed a step and stumbled.

An alert Modi immediately stepped forward and extended his hand to hold Mugabe’s before helping him up the podium.

The two promptly shook hands with Mugabe pretending as if all was well.

But soon after the handshake, the Indian leader yet again came to his guest’s rescue as he, with the assistance of two other aides, helped Mugabe to step down the podium.

Mugabe’s spokesman, George Charamba, later attached a spin to the incident, brushing it aside as minor.

The 91-year old leader still keeps a punishing schedule-flying around the world- despite evidence that his body is failing.

In all his trips, Mugabe travels with a huge entourage which includes foreign affairs people, body guards and doctors among other aides.