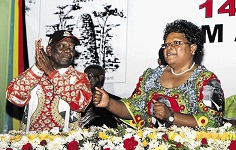 ZIMBABWE – The worst nightmares of President Robert Mugabe’s warring post-congress Zanu PF could soon be confirmed as dozens of the party’s legislators are holding meetings with former Vice President Joice Mujuru with the intention of joining her People First movement, the Daily News can reveal exclusively.

Well-placed sources confirmed that many post-congress Zanu PF MPs (names supplied but withheld on request) — a significant number of them from Mashonaland East Province — met Mujuru in Harare on Tuesday and pledged that they would soon come out in the open in support of her.

If the MPs follow through on their promises, this will set the cat among the pigeons in the post-congress Zanu PF which is reeling from its deadly and seemingly-unstoppable factional and succession wars.

Ruling party insiders who spoke to the Daily News said the mooted move by the concerned legislators would deal “a fatal blow” to the brawling former liberation movement ahead of the country’s eagerly-anticipated 2018 national elections.

“We had fruitful discussions with Mai Mujuru yesterday and pledged our commitment to the cause of democratising the country to the benefit of millions of suffering Zimbabweans.

“She wanted us to state our position unequivocally regarding the People First project and the majority of us happily pledged to go with her,” one of the legislators who plan to ditch the post-congress Zanu PF said.

Contacted to establish whether he was one of the disgruntled ruling party MPs who had met with Mujuru, Maramba Pfungwe legislator Washington Musvaire accused his Zanu PF rivals of working overtime to get him expelled from the party.

“I know that there are malicious people in the party fighting me because they are still bitter that they lost to me in the primary elections. I am not feeling well right now and I am not aware of the meeting with Mujuru,” Musvaire said.

But post-congress Zanu PF insiders said the soon-to-be departing MPs, many of whom are said to be either serving suspensions or facing expulsion, were keen to leave as they were frustrated by the ruling party’s mindless bloodletting and its bigwigs’ lack of appreciation for them.

“Mai Mujuru, being the experienced politician that she is, who also knows Zanu PF inside out, is simply taking advantage of these useless fights to build People First.

“We cannot continue pretending that all is well with us when it is clear that we are no longer reading from the same page with the people who now control the levers of power in Zanu PF.

“In any case, the ship is clearly sinking and you have to be foolish to still believe that the party can take Zimbabwe somewhere,” a Zanu PF central committee member said.

“The beginning of 2016 will be very interesting because there will be dozens of parliamentary by-elections as many MPs join Mai Mujuru and People First.

“The general feeling among many people is that there is no more room in Zanu PF for loyal and honest cadres,” the official added.

“There are many of them who are meeting her (Mujuru). Remember, they are politicians who are being chased away by their party. Where do you want them to go? They are obviously looking for a new political home and they feel welcome here,” he said.

In the meantime, analysts say should the Mujuru MPs, who are said to number well over 100, proceed to jump ship; the move could trigger early national polls, which could crank up the heat on the bitterly-divided ruling party which is already reeling from its seemingly-unstoppable factional and succession wars.

Zanu PF is also under pressure from the looming pact among the country’s opposition parties following the recent signing of a memorandum of understanding between opposition leader Morgan Tsvangirai’s MDC and other parties to demand key electoral reforms before 2018.

The agreement is widely seen as a prelude to a more comprehensive electoral pact, which could see all opposition parties rallying behind a single presidential candidate against Mugabe.

Mujuru also recently launched her Blueprint to Unlock Investment and Leverage for Development (Build), throwing Zanu PF into panic mode and even provoking the open ire of Mugabe, who bizarrely went on to threaten the independent media for propping up his former second-in-command.

The latest developments corroborate a Daily News lead story last week which revealed plans for a second “Bhora Musango”, after it emerged that a number of Zanu PF legislators were readying themselves to join Mujuru.

“While many of us were hopeful that the recent conference in Victoria Falls would calm the rampant factionalism in the party, things are getting worse and not looking good at all going forward.

“As you may know, more than 200 senior officials, a good number of them legislators, have either been expelled or suspended from the party over the past year, which has bred the ideal climate for more chaos and infighting.

“The worry we have is that if dozens of MPs resign en masse, and some say up to 100 legislators could join Mai Mujuru ahead of 2018 because many of them feel unwanted anyway in the party, things could get a whole lot worse both in the party and the country,” a senior Zanu PF official said dejectedly.

Contacted by the Daily News for comment then, Musvaire said Zanu PF would be shooting itself in the foot if it carried out this threat, alluding to the fact that many provincial and district officials were thinking of resigning from the party en masse in protest if this happened.

He said while he would “respect the party’s decision because I am very junior and they are my elders”, his Maramba Pfungwe constituency was in turmoil and a fertile ground for Mujuru to make rich pickings as the ruling party’s factional and succession wars continued to escalate.

“While we as leaders are trying our best to calm people down … those below us may not understand all this. We know the party leadership has not sanctioned our expulsion but rather lower ranking officials who lost to us in primary elections.

“What is saddening though is that all the party structures that supported us in the primary elections have been labelled Gamatox (Zanu PF code for Mujuru supporters) and district chairmen throughout the constituency are threatening to resign,” Musvaire added.

Another post-congress Zanu PF official said with Mujuru said to be launching her party in February next year, the ruling party was “clearly panicking” and hence the “irrational threat” to ruthlessly purge all officials who were suspected to be working with the former VP.

A legislator who has been “falsely accused of being Gamatox” also told the Daily News that he and many other Zanu PF MPs were indeed contemplating jumping ship “because we are not wanted”.

“If bad things can happen to the likes of (War Veterans minister Christopher) Mutsvangwa, imagine what can happen to little ones like us in this mad war. It is very clear that they want to finish us all one by one, and so we will not allow them to dictate to us.

“What our chefs (leaders) don’t realise is that what is happening is political suicidal and could backfire in spectacular fashion as it could open floodgates for en masse resignations not only by us MPs, but also by other party officials who have been labelled Gamatox,” the MP said.

ZIMBABWE - The worst nightmares of President Robert Mugabe’s warring post-congress Zanu PF could soon be confirmed as dozens of the party’s legislators are holding meetings with former Vice President Joice Mujuru with the intention of joining her Peopl...
Share via
x
More Information