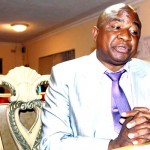 ZIMBABWE – It is now two months and two days since the Phillip Chiyangwa-led Zifa board was elected into office. What we have seen so far is that, instead of moving forward, the Zimbabwean game has actually taken steps backwards.

In that short period, Zimbabwe’s Warriors suffered great humiliation at the Africa Nations Championships (Chan), and the new regime seems to have already fallen back to the old habit of concentrating more on internal politics instead of the development of the game — the same mistake that Cuthbert Dube made. In the name of cleansing the game, Dube got himself entangled in football politics and forgot that the most important thing on the field of play are results.

After the Warriors’ return from their disastrous Chan campaign, we would have expected Zifa to reflect on that disaster and map the way forward for the impending 2017 Africa Cup of Nations qualifiers.

Instead, the new brooms at the football headquarters are busy poking their noses in the administration of the successfully-run Premier Soccer League (PSL), looking into the way it has been run in the past six years.

Yet, during that period, the PSL under Twine Phiri managed to convince sponsors like Delta Beverages, Mbada Diamonds, Supersport, NetOne and BancABC, to get involved in football.

The question is: What is there for Zimbabwean football lovers in the way the PSL has been run in the past six years that is of benefit or of importance than the current performance of their beloved Warriors?

Isn’t it ironic, that it is the same Zifa authorities that want to drag Zimbabwean football back six years, that are at the same time preaching the gospel of moving forward –demonstrated by their throwing out the Asiagate albatross?

What is more disturbing is that at a time when Zimbabwean football needs sponsors more, Zifa have dragged a sponsor — Supersport — into their vendattas. Zifa want to know how the Supersport deal was sealed, by who and how much they could have benefitted.

Is all this really necessary? The PSL clubs who are supposed to be the real beneficiaries of the project have not raised an eye over the television deal, and the fans themselves are happy. So where are Zifa coming from? What really, are they after? And besides, what is better — having something, even if it’s small, or having nothing at all? Those who closely follow Zimbabwean football have pointed out that this is nothing but an after-election witch-hunt aimed at getting at Phiri, who is suspected of having campaigned for Trevor Carelse-Juul during the Zifa presidential polls.

But even if it is true that Phiri was at the centre of the Carelse-Juul campaign, what would be wrong with that? He is entitled to his own choice, in the same way the Zifa Council voted for Chiyangwa.

That the national football federation also wants to know the PSL’s role in the Zifa debt is not only crazy, but is clearly a way to try and get their fingers in what they think is a honeypot at the top flight football league.

Surprisingly, Chiyangwa promised during his election campaign that his board’s preoccupation would be to deal with the Zifa debt. Never did they say they would require the PSL to clear that same debt for them.

The question is: Why are Zifa so interested in what is happening at the PSL? Are they trying to use all these issues to indirectly take control of the PSL?

The people at 53 Livingstone Avenue should be reminded that the major stakeholders of the game are football fans and the sponsors. The fans pay their hard-earned cash to watch football and they want to watch good football.

The sponsors bankroll the game to ensure that it is played. Both the fans and the sponsors are not interested in the type of internal politics the national football authorities have sparked.

Zifa should be warned that both the sponsors and the fans are watching. Their actions will keep away potential sponsors and, at the same time, chase away the few that had committed themselves to the game.

It is a fact that the Warriors still command a large following whenever they play at home. However — given their current form and performance — it will not be long before the public starts losing patience. Although this might not be immediate, it is something that Zifa must avoid by ensuring that the Warriors deliver results.

Zifa should direct their energy at the Warriors and ensure that they qualify for the 2017 Africa Cup of Nations finals, to make the fans and the nation happy.

There is absolutely no need for this madness. Can Chiyangwa and his crew stop this witch-hunting and concentrate on football development.

ZIMBABWE - It is now two months and two days since the Phillip Chiyangwa-led Zifa board was elected into office. What we have seen so far is that, instead of moving forward, the Zimbabwean game has actually taken steps backwards. In that short period, Zimb...
Share via
x
More Information