Zimbabwe back to trillion-figure era 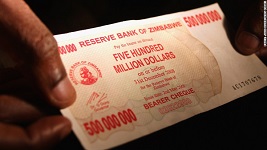 HARARE – The Reserve Bank of Zimbabwe (RBZ) says the value of transactions processed through the national payment systems hit the $1,24 trillion mark during first quarter of this year, rising by 9% from $1,13 trillion during the previous quarter, which ended in December 2020.In its national payments report for the period, the RBZ said the real time gross settlement (RTGS) system accounted for the bulk of transactions during the period.

Zimbabwe’s national payments values bounced back to trillions of dollars in the past year, highlighting how hyperinflation has depreciated the domestic currency.

The last time transactions were valued in trillions was during the 2007/2008 hyperinflationary era, a decade ago.

In its report, the RBZ said volumes decreased by 29% to 338,5 million during the review period, from 473,3 million transactions during the same period in 2020.

“The value of transactions processed through the RTGS system increased by 9% to $802,31 billion for the quarter ending March 31, 2021 compared to previous quarter while the volume decreased by 14% to 2,64 million in the same period,” the central bank said in its national payments report released last week.

Cash payments declined last year after the economy was grounded by the COVID–19 scourge, which forced consumers and businesses to switch to digital payment platforms with most transactions being carried out from home.

The cheque, as a means of payments, used to be one of the biggest contributors, but during the review period, nothing was settled through cheques.The RBZ said this was also a result of the COVID-19 pandemic.

“In view of the need to comply with the COVID-19 pandemic measures, the cheque instrument has not attracted users due to its high human contact coupled with manual processes. However, it remains available for use in the economy,” it said.

It said during the same period last year, SWIFT foreign currency receipts decreased by 16% to US$0,86 billion from US$1,04 billion.

RBZ noted that the net foreign currency outflow increased by 68% to US$274,36 million during the quarter under review from US$162,95 million recorded during the previous quarter.

The aggregate values of retail transactions increased by 9,81% to $434,93 billion in the period under review while retail volumes decreased by 28,66% to 335,90 million.

The value of collateral for cheque, retail payments (Zimswitch) and central securities depository settlement systems increased to $1,986 billion during the quarter under review from $1,985 billion recorded in the previous quarter.

The central bank said the point-of-sale population inThe report noted that there registered subscribers record creased to 128 803 during the review period, from 125 277, in line with the promotion of electronic payment systems. were 6,4 million active mobile financial services subscribers registered during the period under review from 5,2 million recorded in the previous quarter ending December 2020.

Zimbabwe back to trillion-figure era

HARARE - The Reserve Bank of Zimbabwe (RBZ) says the value of transactions processed through the national payment systems hit the $1,24 trillion mark during first quarter of this year, rising by 9% from $1,13 trillion during the previous quarter, which end...
Share via
x
More Information