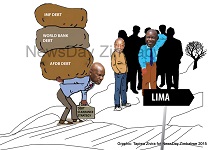 ZIMBABWE – Zimbabwe will today present its debt clearance strategy to three preferred creditors as it seeks to unlock fresh capital.
Zimbabwe owes the International Monetary Fund (IMF), World Bank and the African Development Bank (AfDB) a combined $1,8 billion, which has to be extinguished to access cheap lines of credit.The trio enjoys first preference when clearing arrears. Finance minister Patrick Chinamasa recently said Zimbabwe owes “almost everyone” and will engage all the creditors, as part of its re-engagement process.

Today’s meeting in the Peruvian capital, Lima, on the sidelines of the IMF/World Bank annual meetings comes on the back of moves by Zimbabwe to undertake painful reforms under the IMF’s supervised Staff Monitored Programme.

Zimbabwe seems to have got consensus from member countries on its debt clearance roadmap after Reserve Bank of Zimbabwe governor John Mangudya visited European capitals to drum up support for the plan.

The re-engagement with creditors is aimed at reaching accommodation and unlocking fresh capital, Chinamasa said last week. He said the sentiments from the creditors seemed positive and Zimbabwe would confirm that in Lima.

“It is important that we return to the mainstream global economy,” he said.

Zimbabwe’s proposal has been kept under wraps fearing that hawks in government would scuttle the deal, seen as a last-ditch effort to rejoin the international community.

In his mid-term fiscal policy review statement, Chinamasa said Zimbabwe had to ensure that “our investment and business laws are also accommodative of the interests of foreign direct investors”.

Chinamasa said the country’s investment drive should remain focused and consistent, “if we are to take advantage of the growing interest to invest in our economy”.

He said there was need to speak with one voice over critical policies. Critics to Chinamasa’s reform plan within government have been growing with the latest addition being Youth and Indigenisation minister Patrick Zhuwao.

Currently, the country relies on short-term capital which is unsustainable for long-term infrastructure and development projects. The capital comes at a high cost. Analysts say if the deal is approved, it will be a major plus in the rebranding of Zimbabwe as a destination of international capital.

IMF is seen as an international financial commissioner of oaths whose approval of a country would lure capital to that destination.

Night of Turn Around experience