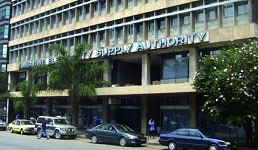 ZPC, a unit of state-owned power utility Zesa Holdings Pvt Ltd, has raised concerns that decisions by the State Procurement Board have been snarled by bureaucracy, delaying tenders for the replacement of aging equipment at Hwange in the country’s west. Daily power blackouts due to electricity shortages have hurt mines and businesses.

Government officials agreed to the deal, Zimbabwe Power Company managing director, Noah Gwariro, said by phone on Monday from the capital. He didn’t have further details about the loan terms.

Hwange generates between 380 megawatts and 400 megawatts of electricity against its installed capacity of 920 megawatts. The country’s next largest generation facility is the Zesa-operated Kariba hydropower plant in northern Zimbabwe, which is operating at half of its 750-megawatt capability because water levels in the dam have fallen amid a drought.

Zesa’s Zimbabwe Electricity Transmission Distribution company unit borrowed $150 million from African Export-Import Bank Ltd commercial director, Ralph Katsande, said on November 19. The funds will help the operator pay off existing debt and purchase equipment, said a person familiar with the agreement who asked not to be identified because the transaction is private.

Zimbabwe and China are set to sign the $1,2bn for the financial closure of the expansion of Hwange Power Station and three separate privately-owned electricity generating units, which will add an additional 300 megawatts onto the national grid, Finance Minister Patrick Chinamasa said.

“We are going to be signing the Hwange 78, which when undertaken will produce 600 megawatts into the national grid,” Chinamasa told reporters at Harare International Airport on the sidelines of a visit by China’s President Xi Jinping.

“There are also power projects which, are going to be funded buy the Chinese, these are Makomo Resources, China Africa Sunlight and Per Lusulu Power. Each one of them will add 600 megawatts when undertaken. I think in the first half of next year, we should see two of these reaching financial closure. There is also interest in the construction of roads”

Zimbabwe has an installed capacity of 2,200 megawatts, but produces an average of 1,200 a day leading to power cuts lasting up to 18 hours a day.