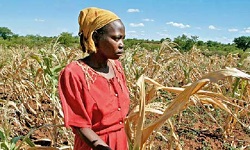 ZIMBABWE – Zimbabwe has appealed to local businesses and charities for $1.5 billion in aid to save more than a quarter of the population from starvation due to drought.

“The government of Zimbabwe requires a total of $1,572,009,953 with effect from February to December 2016,” said Emmerson Mnangagwa, Zimbabwe’s vice-president.

“The amount of rainfall received to date is inadequate to meet basic household consumption needs as well as support for livelihoods, agriculture and wildlife.”

Mnangagwa’s appeal comes barely a week after President Robert Mugabe declared a “state of disaster” in many rural areas hit by severe drought.

Zimbabwe has been affected by a regional drought worsened by the El Niño weather phenomenon that has also affected other southern African countries including South Africa, Malawi and Zambia.

Mnangagwa said the southern parts of the country were the worst affected, with tens of thousands of cattle dying, boreholes drying up and dam levels falling.

“There is a threat to human and animal life as safe water, irrigation water and drinking water sources for animals are increasingly drying up,” he said.

Most of the funding was sought for the import of foodstuffs, but part of the $1.5 billion would be used to repair irrigation equipment across the country to increase food production.

About 1.5 million tons of staple maize would be required to feed people from February to December, Mnangagwa said.

Formerly known as the breadbasket of Africa, Zimbabwe has suffered perennial shortages in recent years and has relied on importing grain from neighboring countries to meet its needs.

Mugabe has blamed the low farm yields on erratic rains due to climate change, as well as sanctions imposed by western countries over his government’s tainted human rights record.

Critics say the food shortages have been partially caused by the president’s land reforms enacted since 2000 when the government oversaw the often violent eviction of white farmers.

Many farms are now under-utilized, and the government has vowed to hold an audit to ensure agriculture land is put into production.

Prayzah and chimbetu on same stage

Tuku ‘back in business’ after a short rest

Zimbabwe seeks $1.5B to prevent starvation due to disastrous drought

ZIMBABWE - Zimbabwe has appealed to local businesses and charities for $1.5 billion in aid to save more than a quarter of the population from starvation due to drought. “The government of Zimbabwe requires a total of $1,572,009,953 with effect from Febru...
Share via
x
More Information
x