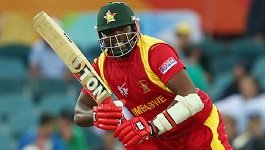 ZIMBABWE – In their first-ever World T20 encounter, Zimbabwe captured global attention when a team made up of rookies led by Tatenda Taibu humbled mighty Australia on September 12 2007 at the Newlands Cricket Ground in Cape Town, South Africa.

It was a star-studded Aussies team that had the likes of Adam Gilchrist, Mathew Hayden, Ricky Ponting, Andrew Symonds and Brett Lee among others.

Despite failing to progress to the Super 8 stage, back then in a group that also had England, that result remains Zimbabwe’s ageless fairytale in a format of the game in which they have failed to spark ever since.

Nine years on, Zimbabwe readies for yet another escapade at the global T20 event fretting over the possibility of being knocked out in the first round by bogey associate nation Afghanistan.

How times change. But who can blame the Dav Whatmore-coached side that has a perfect losing record against the Afghans, having lost four times in four meetings — all in the past three months?

In the first round of the competition that kicks-off on March 8 in India, Zimbabwe have been drawn in alongside Afghanistan thus ranked ninth in T20 rankings, Scotland and Hong Kong. Only the group winners will progress to the Super 10 stage.

On the eve of the team’s departure for United Arab Emirates, where they are currently camping, captain Hamilton Masakadza could draw comfort from the win over Australia but would be worried over the Afghanistan threat at World T20 cricket extravaganza.

“Obviously, it’s quite a long time ago and there are things in the more recent past that we are looking at. Our main focus is to make sure we get back at Afghanistan. They have given us a tough time in recent months, but it’s always nice to be reminded of what we did in 2007,” said the top order batsman who was part of the team that took down Australia back in 2007.

“Afghanistan has been a very difficult side for us of late, but we have learnt quite a lot from the games that we have played against them. And some of the games that they did beat us in were really close and we just didn’t get over the line.

“I am really confident that this time we will really try and get over the line and we are looking to get back at them at the most important stage, the World T20 world championship,” Masakadza said.

Masakadza, Elton Chigumbura, Vusi Sibanda and Chamu Chibhabha, who is on standby, are some of the players, who played in the game that resulted in the epic victory over Australia nine years ago.

Having played the first T20 match against Bangladesh in November 2006, Zimbabwe has played a total 48 matches, winning just 10 and losing 37 times, with one match ending in a tie.

Zimbabwe goes to the World T20 championships ranked 14th on the ICC T20 rankings, also below first round rivals Scotland in 13th place, while Hong Kong are 15th position.

In this instance, however, the national cricket team is buoyed by the addition of South African bowling legend Makhaya Ntini, as well as former Sri Lankan top order batter Marvan Atapattu.

The team will be making a fifth appearance at the World T20 event after withdrawing from the 2009 edition and hopes to progress to the next round for the first time in history.

“Our target is to get through to the Super 10 stage and whatever we get from there will be a bonus,” said Masakadza.

Whatmore’s men kickstart their campaign with a date against Hong Kong on March 8 in Nagpur, before entertaining Scotland on March 10 with the final qualifier match against Afghanistan slated for March 12.

The winner of the group will join England, South Africa, Sri-Lanka and West Indies in Group 1 of the Super 10 stage.

ZIMBABWE - In their first-ever World T20 encounter, Zimbabwe captured global attention when a team made up of rookies led by Tatenda Taibu humbled mighty Australia on September 12 2007 at the Newlands Cricket Ground in Cape Town, South Africa. It was a sta...
Share via
x
More Information