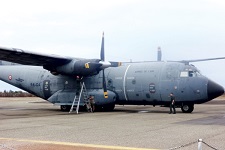 ZIMBABWE – A French military aircraft which crash-landed at Masvingo Airport on Saturday night after developing a technical fault, was coming from South Africa and wanted to refuel in Harare, where the officials also intended to drop some items at their embassy, sources told NewsDay.

Sceptics had questioned the motive as to why it passed through Zimbabwe from South Africa en route to Zambia.

The 10 military personnel from France—including one woman—aboard the flight, were not injured after one of the aircraft’s engines and a gearbox developed faults.

They had to spend the night holed up in Masvingo before engineers, who were aboard the plane, fixed the problem and they proceeded to Harare at around 11am.

Diplomatic sources said the plane was scheduled to refuel in Harare where they also wanted to leave “something” for the French embassy.

Military sources said the plane was cleared to use Zimbabwe’s airspace.

The captain of the plane, whose name could not be established, also had a diplomatic passport.

ZIMBABWE - A French military aircraft which crash-landed at Masvingo Airport on Saturday night after developing a technical fault, was coming from South Africa and wanted to refuel in Harare, where the officials also intended to drop some items at their em...
Share via
x
More Information