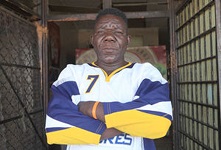 ZIMBABWE – Zimbabwe’s reigning Mr Ugly, and three-times winner William Masvinu, poses for a photo in Harare Friday, Nov. 13, 2015. Masvinu, faces stiff competition this year as organisers are forced to hold preliminary rounds, because of the huge amount of contestants the 2015 competition is attracting.

The man who reigns as Zimbabwe’s Mister Ugly has tough competition in this year’s pageant, with organizers saying they received a record number of entries for this beauty contest with a twist.

For the first time since the competition began in 2011, organizers will hold preliminary rounds to whittle the number of hopefuls from 36 to 12 who will compete in the Nov. 20 finale, said pageant organizer David Machowa.

“We are looking for natural ugliness,” Machowa said.

Facial features count the most, but contestants will also be judged according to their confidence when walking the runway and how they handle the question-and-answer round of the pageant.

“People have always seen ugliness as something to be ashamed of,” said Machowa, explaining why he launched this alternative pageant. “Looks are God given. We should all be proud of who we are.”

There is no female version of the contest. Machowa plans to expand it to other countries in southern Africa.

William Masvinu has held the title since 2012, when there were only a total of five contestants. He won $100 and a voucher for a night’s stay at a hotel, which he cashed in for food.

He still works at a market in Harare, hauling vegetables for $10 a day. He had hoped the wins would lead to advertising contracts but they haven’t materialized.

This year, the owners of a string of Harare nightclubs donated $1,000 for prize money, a crown and the event itself, to be held in a nightclub, said Machowa.

Mugabe must be allowed to rest