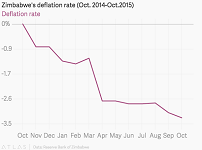 ZIMBABWE – The southern African nation where prices once doubled every three hours and people used wheelbarrows to cart cash to buy groceries is now grappling with a surprising new economic problem: deflation.

That’s right, prices in Zimbabwe—which once spiraled at a head-spinning annual rate of 80 billion percent—have steadily dropped for more than a year now and show no signs of bouncing back anytime soon.

Jebson Zingwangwa, 42, said he sometimes sells just $10 of goods a day at his small shop in Mabvuku township outside the capital of Harare. “People have no money,” he said, noting that he has to support his family and pay the salaries of two employees.

You might think that Zimbabweans would welcome the cheaper prices for everything from barbecued meat at an open-air market to Chinese-made shoes lining the windows of a shop decorated for Christmas.

Deflation is a symptom of an ongoing economic meltdown that experts say is as bad—if not worse—than the hyperinflation that pushed the country to the brink of collapse less than a decade ago.

Defined as a decline in prices in a country or market, deflation is usually caused by consumer demand for goods dropping due to poor economic conditions or other factors like a rising currency, which reduces the price of imported goods.

The biggest issue with deflation might be the uncertainty and the worry that it may do severe damage in the long term as has been seen in Japan.

“Some will benefit from deflation, such as the poor when prices decline,” says Grieve Chelwa, a Zambian economist at University of Cape Town. “But some businesses suffer since their product prices fall but cost structures largely stay put.”

“Companies are closing and people are losing their jobs,” said John Richardson, an independent economist based in Harare. “They would be happy to buy things, but they can’t.”

Official statistics show Zimbabwe’s inflation at -3.29% for the year ending in October, one of the deepest deflation rates in the world.

“The economy is just not producing enough,” said Rejoice Ngwenya, an economist with the Coalition for Markets and Liberal Solutions in Harare. “It’s definitely nothing good for consumers.”

Ironically, the roots of the deflation crisis lies in Zimbabwe’s decision to abandon the Zimbabwe dollar in June and adopt the US dollar as its main official currency as a way of ending the hyperinflation crisis.

Initially, that strategy worked like a charm. Empty shop shelves quickly filled up and prices and wages immediately stabilized. Zimbabwean ATMs now spit out $20 notes and minibus drivers snatch well-worn dollar bills from passengers as they bounce along the capital’s potholed roads.

However, dollarization means the authoritarian government of aging president Robert Mugabe cannot print cash to help jumpstart its struggling economy. Hard-pressed businesses cut prices to lure scarce customers and fire workers to stay afloat. That starts a vicious cycle from which there is no easy way out.

“The beauty of the dollar is that prices remain static, but it is hard to come by,” explained Zingwangwa, the shopkeeper.

The soaring value of the U.S. dollar against other African currencies—notably the rand of South Africa, which is by far Zimbabwe’s largest trading partner—has dramatically worsened the crisis. It makes imported goods much cheaper and makes it even tougher for local producers to compete.

Bringing back the Zimbabwe dollar is not an option because consumers and businesses would almost certainly refuse to accept the tainted currency.

Some believe the perfect economic storm will lead to political unrest. They say that could threaten the rule of the 91-year-old Mugabe and his ZANU-PF party, which has ruled the country since independence in 1980.

“The Zanu PF led regime in Harare is in a huge political and economic crisis,” said Eddie Cross, a business leader and lawmaker for the opposition Movement for Democratic Change.

But others say Mugabe and his party have defied predictions of their imminent demise before — and appear to be firmly in control of the country.

“They’ve written eulogies and epitaphs so many times,” Ngwenya said. “One thing these guys definitely know how to do is stay in power.”